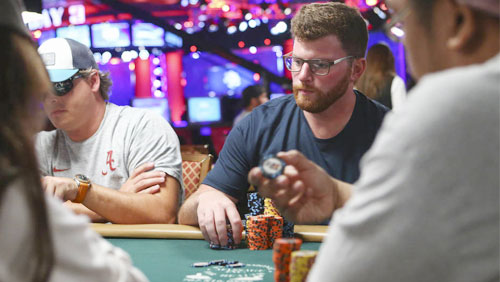 Another round-up of news at the World Series of Poker including Nick Petrangelo maintaining his lead going into the final table of the $100k, Julien Martini binking a bracelet in the $1,500 Pot-Limit Omaha 8-or-Better, and the first online bracelet of the festival goes to…I haven’t got a clue?

I wake up and walk to the Casino Barcelona hoping to bump into my story of the day. My Dad wakes up and spends the next hour pulling hair out of the sink with a cotton bud because he’s retired and doesn’t know what to do, and Nick Petrangelo wakes up and figures out how he is going to make all the right moves so he can bank $2.9m.

To say the poker world is ‘another’ world is sometimes the overstatement of the century.

How many sportsmen and women around the world are waking up this morning preparing to win $2.9m?

10-players began Day 3 of the $100,000 Super High Roller, and the former Global Poker Index (GPI) #1 Nick Petrangelo was the cherry in a bowl full of raisins.

Adrian Mateos, himself a former GPI #1, and one of the most in-form players in the world began the day brightly by cracking Chris Moore’s aces with his pocket treys. Bryn Kenney also doubled up early when his AT battered the A8 of the current GPI #1, Stephen Chidwick. And then Moore got some back when he doubled through Jason Koon AQ>KQ.

Moore’s double-up must have felt like a hand job losing five-digits mid-shift when he moved all-in from the button holding the delectable 98hh, and Andreas Eiler sent him to Neptune without a spacesuit, calling with the rockets. Moore picked up $240,265 for his tenth place spot.

The next man to go was Fedor Holz. The most amazing German since Boris Becker moved all-in holding pocket fives, and recent bracelet winner, Elio Fox called with pocket sixes. Holz picked up the same payday as Moore.

Kenney found another double up, this time AA>77 of Mateos, and the Winamax Pro exited in eighth when he ran QJ into the KT of Fox for the last of his plastic things. Mateos picked up $295,066 for his eighth-place finish.

Eiler doubled through Fox when he turned the nut straight in a hand where Fox shoved holding two-pairs, and then we lost THE in-form player in the world, Jason Koon in seventh.

The Qc came on the turn. Koon moved all-in, and Kenney called. Koon showed K5o for a pair of fives, and Kenney showed Qc for top pair, and the 8h came on the river to seal the final six into Han Solo-like final table carbonite.

Julien Martini was the enemy of male and female poker players all over the world when he prevented Kate Hoang from being the subject of one more final shot from the WSOP photographer.

The Frenchman, who was the only non-American seated at the final table, beat Hoang, heads-up, to take his first bracelet and career-high $239,771. It was Martini’s second WSOP final table after coming eight in a $3k 6-Handed event last year, and he went into this one in fine fettle after winning a $5k WPT Bellagio Poker Championships side event for $72,750 in April.

Hoang’s fan’s heartache was nothing compared to her personal grief. In 2016, Hoang finished the bridesmaid to Kyle Bowker in a $3k version of the same event. 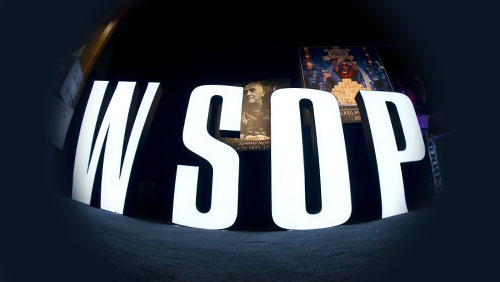 Finally, the first online bracelet of the series goes to an unnamed player playing under the pseudonym Twooopair. The event attracted 2,972 entrants, making it the biggest online event ever held in Nevada. Anyone who has ever written about an online event where you know none of the players will understand when I tell you that I am not writing anything else about it.