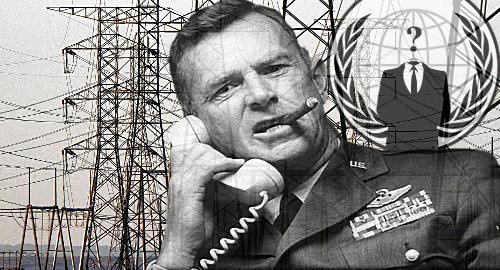 The future leaders of the US military apparently believe that hacker collectives will target state governments’ critical infrastructure unless these government legalize online gambling.

According to a new TomsDispatch.com report, a 2016 war game conducted by students and faculty from the US military’s war colleges envisioned a scenario in which the hacker collective known as Anonymous targeted state governments it deemed insufficiently receptive to the concept of legal online gambling.

Specifically, the 33rd annual Joint Land, Air, and Sea Strategic Special Program crafted a revisionist history in which Anonymous was declared a terrorist organization following a make-believe 2015 attack on Louisiana’s power grid using software tools similar to the Stuxnet worm that the Israeli and US governments (allegedly) used to destroy Iran’s nuclear centrifuges in 2010.

In this alternative history, Anonymous singled out Louisiana for cyber-terror after the state government failed to lift restrictions on online gambling. The pretend cyber-attack resulted in a lack of electricity to retirement homes, rendering air conditioning inoperable, leading to the deaths of 15 senior citizens.

As daft as the above scenario reads, Anonymous has been known to occasionally target online gambling opponents. In 2016, hackers claiming to be affiliated with Anonymous targeted the Czech Republic with a DDoS attack, knocking the official Senate website offline to protest a new law that imposed domain-blocking of unauthorized internationally licensed online gambling sites.

In 2012, Anonymous threatened Zynga with the release of all its games’ software code unless the social gaming operator rolled back plans to lay off hundreds of workers. (The layoffs went ahead and the threat proved hollow.)

On the plus side, the war games scenarists envisioned an imaginary Arizona independent senator named Karl Maxwell McGraw winning the 2020 presidential campaign, which at least allows us to ponder a world in which a bloviating, overstuffed huckster with more spray tan than brain cells is once again a private citizen.