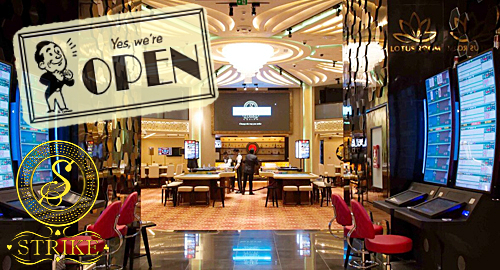 Casinos in the Indian state of Goa are discovering that justice is something of a moving target.

On Wednesday, Indian media reported that Goa’s state government had shut down the Casino Strikes operation in the Grand Hyatt hotel in the town of Brambolim due to the casino operator’s failure to pay its new license fee by the government’s May 8 deadline.

In March, the government announced steep increases in license fees for the state’s shipboard and land-based casinos. Two land-based casinos shut down rather than pay the fees, while others tried to convince the government to let them offer live table games (like those available on the floating casinos) to help soften the financial impact of the fees.

The government rejected these deal-making attempts and demanded the fees be paid by May 1, later extending that deadline to May 8. When Casino Strikes operator, Goan Hotels & Realty Pvt Ltd, failed to pay up by this extended deadline, the government shut down its casino, the state’s biggest land-based operation.

But on Thursday, the Times of India reported that the High Court of Bombay at Goa had granted interim relief to Goan Hotels & Realty, allowing it to resume its casino operations in exchange for making a partial payment of Rs100m (US$1.5m) towards its outstanding license fee obligations.

The company told the court it had applied to reduce its casino’s gaming floor from just over 1k square-meters (sqm) to just 300sqm, apparently as a means of reducing its license fee obligations. The new land-based fees are based on the size of the gaming floor, with fees of Rs400m for gaming floors above 1k sqm, while a floor of 100sqm will cost just Rs100m.

The fact that Goan Hotels & Realty was granted interim relief comes as something of a surprise, given that a shipboard casino operator, Golden Globe Hotels Pvt Ltd, was denied interim relief by the same court earlier this week.

Just speculating, but perhaps Golden Globe is still paying for nearly causing an environmental disaster last summer. Golden Globe’s original floating casino ran aground after striking a sandbar while being towed to its mooring spot on the Mandovi river. The company has since transferred its gaming operation to a different ship.

All is not lost for Golden Globe, however, as the Court allowed the company leave to appeal the ruling denying its interim relief. The matter will be considered at a hearing scheduled for June 6.