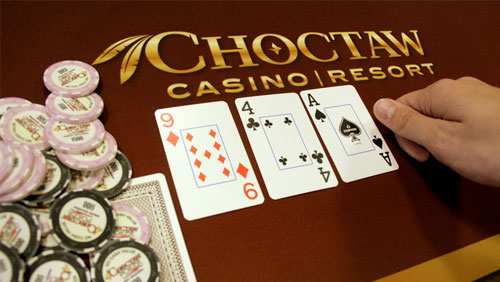 Sometimes, taking a little break pays off. Brad Freeman was a somewhat regular player on the poker circuit before switching gears to become a production coordinator. He decided to get back into the game, and certainly made the right decision. The 29-year-old Texan participated in this weekend’s CPPT Choctaw Main Event, taking home first place and a purse of almost $171,000.

The Main Event was held at the Choctaw Casino Resort in Durant, Oklahoma, and saw 1,086 players take to the felt. The turnout was greater than anticipated and allowed the $1-million guaranteed prize pool to be surpassed by about $53. The grueling action kicked off on Friday and was anticipated to wrap up on Sunday; however, it would go until the early hours of Monday morning before a winner was found.

Several other well-known players were in on the fun, including T.J. Cloutier, who was eliminated in 12th place, Shawn Rice, finishing in 16th, and David Pham, who made it all the way to the final table before being sent to the rail in 8th. Pham picked up $23,923 and 160 CPPT Player of the Year (POY) points for his finish. Cloutier and Rice received $15,369 and $10,324, respectively.

As the clock struck midnight on Sunday and only three players remained, Freeman was finding his game. He picked up a nice pot against Schuyler Thornton after hitting two pair on the river, and then eliminated Brenda Bassett who retired in third place with $88,234 and 640 POY points.

Going into the heads-up action, Thornton held 12.03 million chips to Freeman’s 9.615 million. At this point, Freeman and Thornton decided to make a deal, with each guaranteed a minimum of $140,000. All that remained was the rest of the prize pool, or $30,984. After agreeing to the deal, Freeman doubled up when his pocket Kings held against Thornton’s A-4 of hearts.

Freeman made another monster call in the following hand that left Thornton with only 4.2 million in chips, and kept the pressure on until the last hand. Freeman’s pocket 5s held against a K-4 off-suit that couldn’t find a pair on the board.

Schuyler has had a successful streak with the cards since February. He finished first in the $2,140 Dealers Choice tournament during the WPT LA Poker Classic and followed that up with an 8th-place finish at the NLHE Deepstack event at the Seminole Hard Rock Showdown in April. He has now earned $172,000 since February.