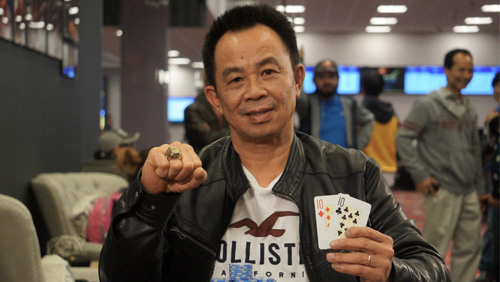 David ‘The Dragon’ Pham shows that the old school brigade still has what it takes to beat the best after taking down his second big entry field tournament in less than a fortnight.

When my parents used to come home from the pub, I would sneak out of my bed, crawl to the top of the stairs and peek downstairs. One time I saw a woman wearing a basque and stockings. I quickly returned to my room.

Another time I heard a commotion. Off I went, but as I reached my depressed area of carpet, I heard a sound I had never heard before. I can’t even describe. Tethered to a scream. Shouting. The sounds of things falling from pristine places. My Dad bellowing.

The next morning I woke up and saw a woman in my kitchen making poached eggs. She turned to me – a purplish-grey eye socket, blood-river eyeball.

“This?” She said pointing to the mess.

I like to think the world doesn’t hear the sound of men beating women anymore. Naive, I know, but it’s an old-school thing, like taking your belt off and telling your child to drop his pants.

You can blame David Pham for my morose memory mush.

I was in a happy place until I read he had won the $1,675 buy-in World Series of Poker Circuit (WSOPC) Main Event at the Bicycle Casino in Los Angeles and started thinking about old dogs and stuff like that.

I guess if you replace the evolution of husbandry with poker then Pham should be the less evolved. Look, I know nothing about the guy except he has a killer nickname (Dragon), but one look at him tells me that he aint spending his nights drinking green tea while watching videos on PioSOLVER.

Nah, this guy is not in Steffen Sontheimer’s Whatsapp group, for sure.

Pham is an old school gut feel intuit who leaves his opponents nursing purple patches of flesh in a very different way than the Fedor Holz’s of the world.

And his method is not madness.

The next time I’m at the table, and I smell a fart, it won’t be a feeling of disgust that rises from my belly, but fear – fear of the dragon.

Matthew Lambrecht was another big winner at the Bike.

Lambrecht won his second gold ring after topping a field of 89 entrants to win a career-high $85,440 in the $3,250 High Roller. Ari Engel, who won his ninth ring earlier in the festival, nearly made it double digits with a fourth-place finish. Triple Crown winner, Mohsin Charania, finished fifth, and the former CalvinAyre Poker Routines guest James Collopy finished in third.