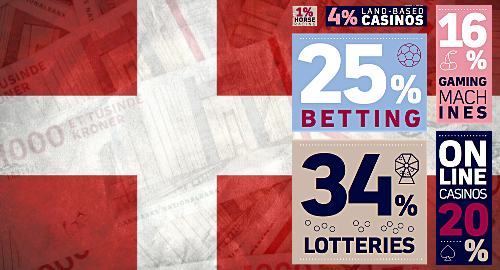 Denmark’s licensed online gambling operators now account for over half of all market revenue, according to the local regulator’s annual report.

On Monday, Denmark’s Spillemyndigheden regulatory agency released its 2017 annual report, which showed overall gambling revenue of DKK9.2b (US$1.53b), a modest 3.2% rise over 2016’s total but 18.4% higher than in 2012, the year Denmark liberalized its online gambling market.

Online casinos ranked third with DKK1.8b, a 15.5% year-on-year gain, while gaming machines outside casinos suffered a 1% decline to just under DKK1.5b. Denmark’s seven land-based casinos’ revenue was flat at DKK375m, as was horse betting at DKK116m.

Danish punters spend roughly one-third of their total gambling spend on lotteries, well below the European Union average of 46.5%. By contrast, sports betting accounts for 26.5% of Danish spend, significantly larger than the 15.6% EU average. Casino game spend claimed a 39.8% share, slightly higher than the 38% EU average.

Based on gross gaming revenue per capita, Danish punters rank third in the EU in terms of both betting and casino game spend, while managing only a 13th place showing in the lottery vertical. The average Danish sports bettor wagered roughly DKK89.5 per week in 2017, while winning back roughly DKK80.

Denmark had 27 active online casino licenses and 15 sports betting licenses at the end of 2017. The regulator blocked 24 unauthorized gambling sites in 2017, of which six related to eSports ‘skin betting.’

Denmark’s ROFUS self-exclusion program for problem gamblers had a total of 12,877 individuals registered at the end of last year, 46% higher than at the end of 2016. The regulator credited the increase to its promotion of the registry via television commercials and promos in 43 cinemas, as well as the launch of a dedicated ROFUS website and the MitSpeil (MyGame) app that allows gamblers to track their activity.