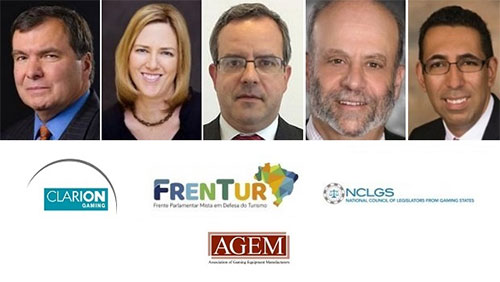 Organised in partnership with the National Council of Legislators from Gaming States (NCLGS) and the Brazilian Parliament Front in Defence of Tourism of the National Congress, and sponsored by the Association of Gaming Machine Manufacturers (AGEM), the event will take place in the Brazilian Chamber of Deputies on Thursday, 26 April, and follow the industry gathering at the Brazilian Gaming Congress in Sao Paolo on 22-24 April.

First organised alongside ICE London in 2017, International Legislators’ Agenda (ILA) is a dedicated educational and networking initiative aimed at providing an invite-only platform for policy-makers, legislators, elected officials and government bodies to share best practice in the legislation and regulation of gambling.

With the authorisation of gambling being currently debated and studied by Brazilian legislators, ILA travels now to the heart of the country’s legislative arm, Chamber of Deputies, to feature international experts who will share their experiences and be available for questions and one-on-one conversations. Speakers will include Senator William P. Coley, II, State of Ohio Senate, Becky Harris, Chairwoman, Nevada Gaming Control Board and former NV Senator, Paulo Duarte Lopes, Director of Gaming Activity Planning and Control Director from the Ministry of Tourism of Portugal, Michael Pollock, Executive Director of NCLGS – National Council of Legislators from Gaming States and Carlos Carrion, Chairman Mexico Committee, AGEM.

Senator William Coley, incoming NCLGS President, said about the event: ‘NCLGS was created more than two decades ago for the sole purpose of promoting best practices among US lawmakers. Working with Clarion at ICE and in Brasilia, that core goal is now global. The leadership of NCLGS is committed to fostering an international dialogue, and to sharing our experience and ideas.’