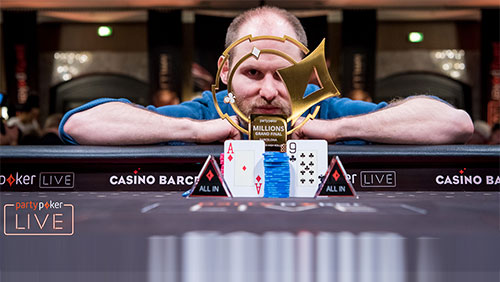 Regardless of how successful someone becomes at poker, there still has to be an incredible sensation when collecting a high-dollar pot. Sam Greenwood could address the subject, as he now has

two million-plus prizes in about three months. He won $1.3 million at the Caribbean Poker Party festival, and now picked up another $1.2 million at the LIVE MILLIONS Grand Final in Barcelona. While participating in the Super High Roller (SHR) tournament, not only did he win, but he came back from having a chip stack equal to only one big blind to pull off the feat.

Fifty-seven players descended on the city that brings us tapas and the Picasso Museum to participate in the SHR. The action attracted several great high-stakes players, including Patrik Antonius, Keith Tilston and Joao Simao. Tilston would make it all the way to fourth place, where he was sent to the rail with $351,000. Antonius followed next, bowing out in third with a little more than $494,000. Simao hadn’t been as fortunate, and the Brazilian player was eliminated in sixth place for $197,654.

Holding only 600,000 chips to his name when the blinds reached 250,000/500,000, Greenwood certainly looked to be on the edge of defeat. However, he played what was probably the tightest game of his life, slowly climbing out of the hole to grab a decent stack as the number of players at the final table dwindled. Several key double-ups gave the Canadian player an edge, and he found himself in a showdown against Spain’s Sergio Aido.

The heads-up action was methodical, with neither player willing to take a huge chance. However, Greenwood was able to pick away at Aido’s stack to take a commanding chip lead, and never looked back. The final hand saw the pair square off with Aido barely hanging on. Greenwood would be rewarded with a flop that gave him two pair—A-9—and he played it coolly through the river to capture Aido’s remaining chips. The Spanish poker pro would settle for second place, and $741,198, and was the second Spanish player to finish as a runner-up in a SHR tournament in the festival.