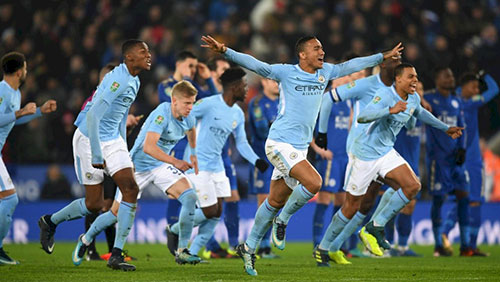 Manchester City won the first of three potential trophies after beating a lacklustre Arsenal by three goals to nil in the Carabao Cup Final at Wembley.

Our midfield was so slow butterflies could have eaten them alive. It may be under 14 football, but you learn plenty by observing kids kicking a ball around the park at that age. Football is, after all, a microcosm of life.

And each week, I used to tell them the same thing.

Limp off the pitch exhausted from the effort, and I don’t care about the score. But, if I don’t see you run; that’s unforgivable. It’s disrespectful for your manager, your teammates and yourself. I don’t want players like that playing for me. Go and play somewhere else.

The former Manchester United and England star launched into a scathing attack on the Arsenal midfield trio of Granit Xhaka, Aaron Ramsey and Mezut Ozil after the London Club failed to show up in the first Wembley Cup Final of the season.

The Carabao Cup (it sounds like a hunting award).

It was always going to be a tough ask for Arsenal. City is the best team in the world, right now. There is little drama watching this gifted child. However, the manner in which Arsenal lost was another indicator that Arsène Wenger needs to move on and open up a library or something.

Neville called the performance ‘spineless and a disgrace.’ There was no filter in his assessment of the midfield trio.

“Look at them walking. You don’t walk at Wembley. Run!”

Back to my kids who weren’t running. You have to look inward and ask why? These are children with brand new lungs. They didn’t walk because they were tired. They didn’t want to run for me.

Arsenal players don’t want to run for Wenger, and it’s a common theme piling out of the fanfare of football pundits for many years now. Maybe after this display, the Arsenal board will finally wake up and end Wenger’s contract a year before its expiration date.

Wenger should have followed his old sparring partner Sir Alex Ferguson into the stands many lullabies ago.

City controlled the game on a bitterly cold afternoon at Wembley. It wasn’t a game for the purists – mainly because only one side showed up – but it was a game that Vincent Kompany would remember. The City captain was the man of the match, a special moment for someone who has had to watch over 130 City games from the stands because of injury.

Guardiola’s side secured his first title as early as the 18th minute. Claudio Bravo thundered a ball down the pitch, the savvy Sergio Aguero nudged Shkodran Mustafi out of the way, raced onto the goal and chipped the ball over the Arsenal keeper for his 30th goal of the season.

It was a poor first half.

Jack Frost stole all the energy.

Guardiola’s side was late out for the second half. Whatever he said to them worked, within ten minutes they were two to the good. Kevin De Bruyne sprayed a corner to the unmarked Ilkay Gündogan at the edge of the box, and Kompany diverted his shot into the net. David Silva made it three with a thunderbolt in the 65th minute.

If you thought Arsène Wenger’s world couldn’t get any bleaker, they face Man City in the Premier League on Thursday night.

Why the EFL Championship will be the best title race in England this season
Paul Seaton
12 February 2020
.