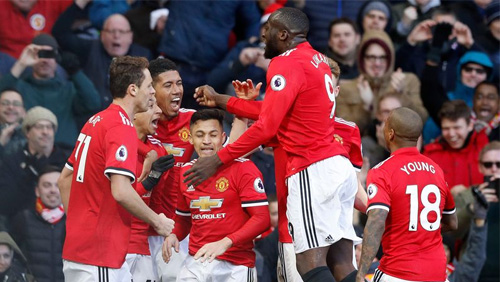 Week 28 of the English Premier League sees the race for the Champions League hot up with Man Utd beating Chelsea at Old Trafford, and Liverpool scoring another four, this time at West Ham.

Liverpool, Spurs and Arsenal – Champions League is the goal, year-in-year-out; anything more is a bonus; anything less and it’s time to start looking for another club to manage.

Liverpool pulled up to 11/2 joint second favourites to qualify for Europe’s elite competition after thrashing West Ham by four goals to one at Anfield. With Man Utd playing on Sunday, the win saw Liverpool climb into the second spot for the first time since things got serious.

It was another titillating performance from the attacking trident of Mohamed Salah, Roberto Firmino and Sadio Mané. All three got onto the scoresheet, making it 66 goals for the trio this season. Only Man City have scored more this season.

West Ham came to Anfield with a kick in their step. Manuel Lanzini returned after a long layoff, and the experienced Patrice Evra parked up his taxi to make his debut at full-back. However, David Moyes doesn’t fancy his chances at Anfield. The Scot has visited 14-times, and never won (drawn 7, lost 7), and this visit went the same way.

Salah spun and shot in the box only to see the ball rebound off the inside of the post. Near miss #1. But Liverpool was in a game. Marko Arnautovic (who will surely find a new club in the summer), hit the crossbar after Lorius Karius tipped the Austrian’s audacious chip onto the crossbar.

The travelling Hammers waved Bobby Moore flags in the stands. A sign of love from a West Ham legend who died 25-years ago, but even a Moore in all of his pomp would have struggled to contain the Liverpool frontline.

The first breach came in the 29th minute. Salah swung over a corner from the right-hand side, and Emre Can rose from the pack to head into the bottom corner for a century of 2017/18 Liverpool goals.

Alex Oxlade-Chamberlain had a blinder in central midfield. The former Arsenal wide man broke through the West Ham defence in the 52nd minute before putting Salah through in the penalty area. The Egyptian didn’t take his eyes off the ball. He turned on a sixpence, and shot into the bottom corner for his 31st goal of the season.

Five minutes later, and Liverpool made it three when Can put Firmino through on goal. Adrian made a dash; missed, and the Brazilian tapped it into an empty net for his third goal in as many games.

West Ham pulled one back through substitutde Michail Antonio, before Sane made it four in the 77th minute after some excellent wing play from Andy Robertson.

Jürgen beamed like a Cheshire Cat – “It was a joy to watch to be honest.”

It was the sixth time this season that Liverpool had scored four time.

With Liverpool winning so comprehensively, it was crunch time at Old Trafford where Man Utd faced Chelsea knowing anything but a win would see them remain in third place. It was a stark reminder of the damage incurred through United’s complacency in recent weeks.

Much was said about the animosity between Jose Mourinho and Antonio Conte, but the two shared a pre-match handshake, and even enjoyed a few giggles on the sidelines during the match.

The man-crush behaviour on the sidelines transmuted onto the pitch where the 22-players played out a tepid affair considering the jewels on display. Paul Pogba began ahead of the injured Ander Herrera, and Alvarao Morata got the nod ahead of Olivier Giroud. United had only registered one win in the past 14 against the Blues.

Chelsea started well with Morata hitting the bar when he seemed destined to score. And then Willian scored his fourth goal in three games after finishing a move he began at the edge of the box. The Brazilian drove the shot through David De Gea, and it was a sign to come as the Spaniard had an unsually bad day between the sticks.

The lead lasted seven minutes before Alexis Sanchez, Anthony Anrtial and Romelu Lukaku teamed up in devasting fashion. The Belgian scoring from close range after lovely intricate play from the trio. And with 15-minutes left on the clock, Lukaku turned provider when Jesse Lingard came off the bench to head home his inch perfect cross at the near post to move United back into second place.

Chelsea drop into the fifth spot after Spurs beat Crystal Palace at Selhurst Park. Once again, Mauricio Pochetinno’s side left it late, and once again Harry Kane was the saviour, heading home his 14th goal in 13 February games to move Spurs above Chelsea in the table.

Man City and Arsenal picked up a game in hand as the pair tussled in the final of the Football League Cup. Man City won 3-0 thanks to goals from Sergio Aguero, Vincent Kompany and David Silva.

A Peek at the Bottom

West Brom may have sacked the Chairman and the CEO, but the manager remains in a job, despite losing for the 22nd time this season. Alan Pardew, who has lost 8 of his 14 games in charge since replacing Tony Pulis, will take charge for the fixture against Watford at the weekend despite losing 2 v1 at home to fellow relegation potentials Huddersfield. The bookies have the Baggies as the 1/8 dead certs to hit the Championship. Huddersfield join Palace at 9/4 after this crucial win.

Swansea’s run of ten games without defeat came to an end at the Amex Stadium. Brighton, who were the favourites to return to the Championship when the season began, now sit in 12th place after a crushin 4-1 win. Glenn Murray was the star of that one scoring his tenth league goal of the season (Kane, Sterling and Vardy are the only Englishmen to score more).

Stoke remain in the bottom three despite an impressive draw at the King Power. Xherdan Shaqiri opened the scoring for the third game in a row, with another stunner from outside the box. Jack Butland put the ball into his own net with 20-minutes remaining to salvage a point from Leicester who hit the post twice in a late inslaught.