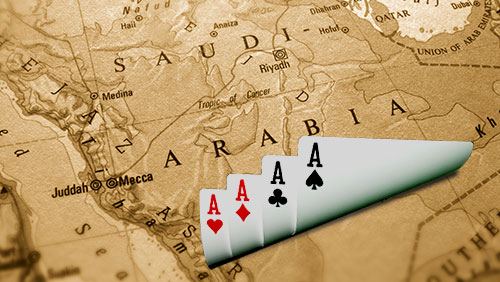 “Here”, the king said, “things that just don’t happen, happen.” The particular king was Peter the Great, and the country he was talking about was Russia. But today the same thing might be said of another old Kingdom,  moving up fast in the Improbability Stakes. Wait for it: open, public card tournaments, for cash prizes no less, are coming to-of all places- Saudi Arabia.

This is surprising news from any standpoint. For anyone who has spent any time in the Kingdom, this is absolutely lightning out of a clear sky. When people think of Saudi Arabia, they think of oil, desert, and a hyper conservative branch of Sunni Islam called  Wahabism. And up until no

w, they were right.  Women were locked away under the control of their men.  Consumption of alcohol was a flogging offense. Thieves could and did have their hands cut off. Judicial beheadings were frequently carried out, and not just for murder either.  If you sell drugs in Saudi Arabia, make sure one of them is a cyanide capsule. For  yourself.

Almost every kind of public entertainment was verboten. Even movie theaters were taboo, let alone music concerts. And gambling? Absolutely outside the pale. Unlike Christian society,  where bans on gambling are based on interpretation of the Scriptures, Muslim countries who steer by the Koran can look to no less than three verses of their holy book that specifically, directly condemn gambling and games of chance. And this prohibition is applied in an ultra fundamentalist framework. As late as 2016, the grand mufti of Mecca, one of the most venerable and influential  Muslim scholars of all, issued a fatwa (opinion) to his followers against playing chess.  According to him it was  a form of gambling, or at least a gateway drug to it,  and therefore on the no-fly list for believers.

To begin with, East of Suez things are not always as they seem. There is, you see, no unanswerable central authority, no chain of command, as we understand these things, in Islam. A fatwa is called a legal opinion, but unlike a court ruling in the West, it is non-binding. Those who wish to follow it, can. Those who don’t, don’t have to. And so while the Grand Mufti said he didn’t like chess, there was nevertheless a Saudi chess society, operating openly, and it’s still there today.  Arab and Muslim societies can be surprisingly tolerant and fluid. More often than outsiders realize, there are times when, even though the authorities are against something, they nevertheless let it alone so long as it doesn’t become too flagrant.

And to counterbalance the public forbidding of almost everything, (as a Westerner would see it), there is a powerful traditional counter. The home is sacred. What a man does inside his own walls is his own business, unless something really drastic jumps off.

But the big thing that happened was modern times. You can’t keep ’em down on the farm forever. Like it or not, the Internet, social media, and communication services like Skype all became available. Initially they were  banned, but this was, essentially, a hopeless task. Even with the help of the dreaded Mutawwa, the religious police, there simply weren’t the resources to track down every cell phone and laptop in the kingdom. Saudi demographics underwent a huge change, as well. The population exploded. Today the median age for Saudi citizens is only 29. Young people, essentially, increasingly inclined to challenge the old order and make a place for themselves.

And Saudi government changed as well. Until very recently, the Kingdom had been ruled by consensus, what amounted to a comfortable powwow of princes. (The founder of the Kingdom, Abdul Aziz, had 43 sons, all of whom had multiple wives). But the senior princes increasingly began to pass away, and the Kingdom found itself at a crossroads. Could the old pattern of government be maintained as the restless new generations came along? Or would there be an explosion as the new wine hit the old skins?

The situation seems to finally have been resolved with the ascension of Mohammed bin Salman to the post of Crown Prince, under his father King Salman. The usual pattern had been to have one of the younger sons of Abdul Aziz in that slot, but there are few of them left today, and most in their 90s.

And Prince Mohammed is squarely in the reform camp. In order to forestall unrest and perhaps an uprising, he has spearheaded a campaign of modernization that would have been unthinkable even a decade ago. Last year a series of seismic changes was unleashed on Saudi society. Women may now drive cars- heretofore  a crime. They don’t even need to put on head to toe cloaks to appear in public. Snapchat, Skype, and other social media are now generally available  (but closely watched, to be sure). And the ban on movie theaters has been lifted.

But even with all the reform, card games out in the open is a long step, even a defiant one.. How can the advocates of public card tournaments possibly get away with it, given all the clear pronunciations against gambling in Koranic law and commentary?

It’s all in the nature of the game that has been approved. The card game in question is called baloot, and it’s a very good fit for the effort to legitimize cards over there. Is tradition strong medicine among the Arabs? Baloot has it. The game was introduced into Arabia during the 18th century, when the place was an Ottoman province. It’s  a development of the  game “ belot”, itself a French version of bridge. So people have been playing baloot in Saudi Arabia since before there was a Saudi Arabia (the Kingdom was only founded in 1925, after all). More importantly, baloot/belot  is a game of skill.

A game of baloot takes four players, two teams of two, and a standard deck of 32 cards- ace and 10 through King of the familiar Clubs, Diamonds, Hearts, and Spades. Play proceeds counterclockwise from the dealer, with bids, public cards, following suit, tricks and other maneuvers familiar to bridge players everywhere. Scores are awarded for winning, of course, and bonus points for other occurrences such as a run of serial cards, holding four aces, and so on.

The Arabs have played the game privately, in their own homes, time out of mind, So it’s traditional. It’s based on skill, not luck, so it’s family-friendly and does not break the stricture against games of chance. And the Kingdom would far rather see its clever minds figuring out ways to take the next trick, rather than take the palace. Open and innocent entertainment are much preferable to secret resentments and vendettas.

And so we have another paradox of the Middle East. Card games, so often criticized as harmful to moral and social fiber, are turning out to be an agent of civilization.What will be the result? We can only be guided by the old Arabic proverb: “there is always something to be learned from experiments”.