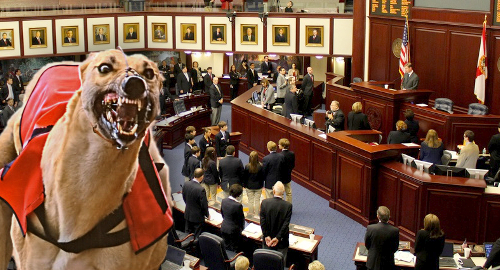 Call us crazy, but we think we’ve figured out a way to make Florida’s annual gambling legislation derby a whole lot more entertaining.

Two weeks ago, Florida’s state Senate introduced the 2018 version of its omnibus gambling legislation. Among other things, SB 840 would approve daily fantasy sports operations and allow greyhound- and horseracing tracks to decouple, aka abandon racing while keeping their more lucrative slots parlors and cardrooms.

The bill would also allow those cardrooms to continue to offer the controversial designated-player games that the state’s Seminole Tribe believes run contrary to the agreement they signed last July with Gov. Rick Scott.

As such, in order to get the tribe’s support, the legislature will likely have to sweeten the Seminoles’ pot, possibly by adding the exclusive right to offer roulette and craps at the tribe’s six gaming venues in the state, as was offered in the 2015 gaming compact the tribe inked with Scott but which was never ratified by the legislature.

As with last year’s (ultimately doomed) effort, this House bill would renew the Seminoles’ existing compact and extend it through 2038, while boosting the annual payment from tribe to state from $250m to at least $325m.

But the House bill would ban the cardrooms’ designated-player games and prohibit tracks and jai-alai frontons outside Miami-Dade and Broward counties from launching new slots operations, even if voters in these counties have already given these plans their approval.

This year’s abbreviated legislative session, which ends in March, is further complicated by the fact that the Disney-backed No Casinos group succeeded in getting an amendment onto this November’s ballot that could require any gambling expansion plan to secure approval of the state’s voters.

The idea that any plan enacted after November could be undone by voters may provide the necessary impetus for legislators to get something done this time around. That said, the House appears largely content to carbon freeze the current gambling landscape, so who knows?

Frankly, we think the state and the rest of us would be far better served if we could just get all the stakeholders and legislators in a room, dress them all up in giant rabbit costumes, lock the door, then threaten to unleash all those coked-up greyhounds into the room if they can’t reach consensus.