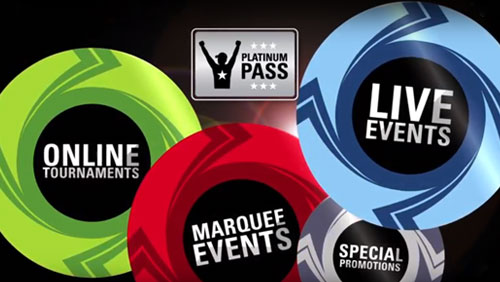 PokerStars is going all Willy Wonka with the news that 19 Platinum Passes worth $570,000 will be distributed online and live at events like the Winter Online Series, the PokerStars Caribbean Adventure, and PokerStars Festival London.

Mihai Manole has been competing in PokerStars live events for as many years as I have been writing about them. But he’s never bubbled one until the PokerStars Championship Prague.

The action was on the stone bubble spot when Manole found himself in the big blind with only two bigs. As he sat there, like a frightened child seated in a dental waiting room for a prebooked root canal without anaesthesia, Thomas Mercier put him all-in from the button. Manole flipped open his cards revealing A4 – not bad, but not as good as Mercier’s AJ, and five cards later Manole was out.

As Manole began floating around the poker room in his own personal tomb, there was hope. The short-stacked Andrzej Siemieniak was all in on a flop of J65r, holding bottom set, against Konstantin Farber holding 97 for the gutshot. If the dealer could burn and turn an eight, then Manole and Siemieniak would split €8,700 down the middle.

And it turned up on the turn. The river bricked, and both Siemieniak and Manole became the twin bubble boys in the midst of the strangest amalgamation of emotions you could imagine.

As the two of them pondered suicide, Daniel Negreanu ushered them to a spare table, told them to sit, grabbed the microphone. He announced that the pair would flip for the first-ever €30k Platinum Pass, including a free seat into the €25k PokerStars Players No-Limit Hold’em Championship (PSPC) and the chance to become a multi-millionaire.

“I am in Prague, played 13 tournaments and hadn’t won any coin flips,” Manole told PokerNews after the dust had settled.

The first deal ended in a chop.

The second deal saw Manole dominate Siemieniak with KT v K5, but once again the run-out resulted in a chopped pot, only this time NOBODY noticed. Siemieniak was told to bugger off and get a life, as Stars officials ushered Manole in front of the paparazzi, blinded by a barrage of bulbs as he held aloft a potential ticket worth millions.

And then the needle record scratch moment.

Someone recognised that the second deal was also a chopped pot. They would have to flip again. Fortunately, PokerStars saw sense, dipped into their pocket and handed a second €30k Platinum Pass to Siemieniak who by this time had a ball and chain around his ankle and was about to leap into the Vltava.

And there are over 300 more of these things to give away if you can keep up with the utter madness of it all.

PokerStars has announced how they’ll release their next 19 Platinum Passes over the next month. As promised in their initial announcement, the online and live realms are in the conversation.

PokerStars will distribute 13 Platinum Passes during live events across the globe in January.

Here is the rundown.

To remind you, PokerStars will release more than 300 Platinum Passes, through a variety of means throughout 2018 culminating in the $25,000 buy-in No-Limit Hold’em Player’s Championship at the Atlantis Resort, Bahamas Jan 6-10, 2019.