Home / Poker / Ex Aussie poker player gets a tomahawk in the face; Somerville back in Oz 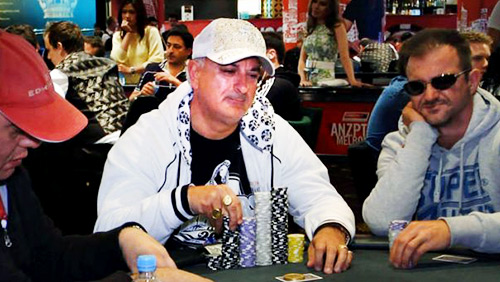 A former Australian poker player ends up with a busted jaw after receiving a tomahawk to the face, and Jason Somerville confirms a partnership with the Aussie Millions for the third year in a row.

I used to think that karma was the name of an Indian curry, but now I learn that it’s something that smacks you in the face with a tomahawk if you’ve been a naughty boy.

In 2014, Australian police arrested, Bill Jordanou, on alleged fraud charges (142 of the things). Officials believed that the 58-year-old Australian poker player was implicit in a scheme that used false documentation to con the banking system to pass on $76m in fraudulent loans.

Jordanou was acting as a ‘financial advisor’ to the accountancy firm Zaia, Arthur and Associates who forged documents to defraud clients so they could borrow $76m from various banks for ghost property developments.

Jordanou was in the news again this week after The Age reported that the man ranked #69 in the Australian Live Tournament Earnings list on Hendon Mob, ended up in hospital after an attack involving a tomahawk.

According to reports, the attack happened on Nov 26 over a dispute involving the sale of a car that had been moved on with an outstanding debt owed to the previous owner.

An eyewitness told The Age that they could hear the ‘thud’ when the butt of the tomahawk smashed Jordanou in the face. I guess he can call himself lucky it wasn’t the sharp end. Jordanou suffered a broken jaw, broken nose, and a busted eardrum. The Age contacted Jordanou for comment, and the poker player denied the assault took place.

Jordanou appears in court on those fraud charges next year.

Mr Jordanou isn’t the only member of the family due to face the beak next year. Suzanne Jordanou, 57, is also due in court after falsely providing documents to convince Westpac Bank to part with $650,000 and $450,000 in loans.

But Jason Somerville will be.

The poker team at the Crown Casino in Melbourne will once again turn to the Twitch sensation, to deliver the blow by blow action of the 2018 Aussie Millions Poker Championship.

The news means the PokerStars Pro will be a fixture at the Aussie Millions for the third successive year, after initially agreeing to partner with Crown on the eve of the 2016 event.

Somerville, who has over 200,000 followers on his highly successful RunItUp (RIU) Twitch channel, will broadcast a selection of live coverage, game analysis, and colour commentary.

The 2018 Aussie Millions Poker Championships is the second big series of the year. It begins on 17 January when the PokerStars Caribbean Adventure (PCA) ends, and finishes on the 5 Feb.

There will be 26 events in total, including an A$25k, A$50k, and A$100k Challenge as well as the A$10,600 Main Event. Last year, the Aussie Millions was the home of a classic David v Goliath story when Shurane Vijayaram won the A$1.6 million first prize for his first-ever recorded live tournament cash.