Macau, China, December 11, 2017 – After 11 Asian Poker Tour festivals held in various destinations throughout the 2017 calendar year, we have reached the end of another fantastic season. Our final event, the APT Finale Macau Championships came to a close last night at Macau Billionaire Poker in Babylon Casino. We applaud all the players that triumphed these past twelve days and thank everyone that came out to support our year-end festivities.

Before we give you all the highlights, we’d like to congratulate our APT Player of the Series winners!

Impressively, none of these three players championed any of the festival’s events instead their multiple deep runs earned them big points to secure the top three spots. Our first placer was Chinese Taipei’s Hung Sheng Lin. This was a great finish for Hung Sheng who was clearly on fire at the finale. He tallied the highest number of points with his three cashes and pocketed HKD 118,700 in combined earnings.

Hung Sheng also took 3rd at the opening Game of Champions event, but since it was invitational, no points were awarded. For his incredible performance, he won an exclusive luxury watch, the APT POS customized ring, and the APT POS #1 trophy.

The APT POS 2nd placer was Malaysian pro Michael Soyza. Soyza only participated in two events at the finale and he ran deep in both for HKD 267,000 in total earnings. He placed 7th at the Main Event and went further at the Championships Event with a 3rd place finish. He was awarded the 2nd place APT POS trophy.

And earning the 3rd place spot in the APT POS was Norway’s Kai Paulsen. Like Soyza, Paulsen also ran deep in the featured events. He finished 5th at the Main Event and 9th at the Championships Event to earn a combined HKD 173,900. Paulsen was awarded the 3rd place APT POS trophy. In addition, Paulsen did claim one title, one he should be very proud of even though it didn’t earn him any points, he won the Game of Champions opening event besting 17 of his fellow victors.

And now on to the highlights…. 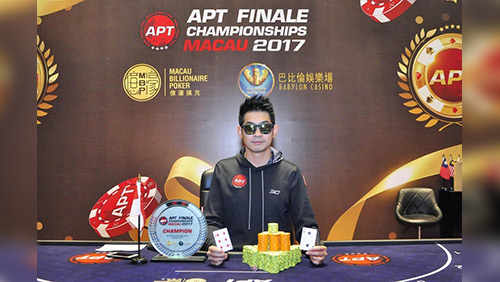 Singapore’s Alecz Xianhe Chan rose above the tough competition at the final day of the APT Championships Event to capture his first APT title and a sweet payout of HKD 369,950. It was a truly impressive run for Chan who railed six players on his road to victory. Runner-up Victor Chong also earned high praise for his performance. He was the dominating chip leader for a majority of the final day and was slightly up in chips at the heads up round before a deal was struck. Both players opted to split the money evenly and flip for the trophy.

India’s Varun Gupta was a newcomer to the APT circuit but made sure to leave his mark. He overcame a field of 157 entries, and despite being dominated by Asian pro Jack En-Ching Wu at the heads up round, Gupta stole the show and ran away with the APT Main Event title. Due to a deal, Gupta earned slightly less than Wu, HKD 300,400 to Wu’s HKD 310,000.

The biggest prize money of the finale went to High Rollers champion Yunsheng Sun from China. Alike our major event winners, this was also Sun’s first APT title. He championed the 31-player field to earn the HKD 481,400 first place money. 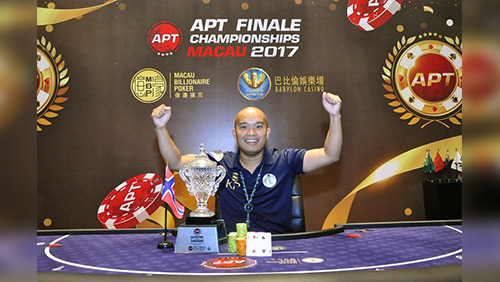 Kicking off the last festival of the APT’s 2017 season was the APT Game of Champions. This event’s prize pool was sweetened with an extra US$10,000 divided among the top three finishers. Claiming the victory was one of the APT regulars, Norway’s Kai Paulsen. Due to an ICM deal with runner-up Stephen Nathan, Paulsen earned HKD 66,300 and Nathan HKD 73,100. Taking 3rd was Hung Sheng Lin for a HKD 34,900 payout.

And that’s a wrap folks! The APT 2017 season is in the books! Enjoy all the daily highlights of the finale in our APT YouTube channel. For the major events, we also have the Live Updates posted so you can relive the action. Of course if you want to catch up on all the other past APT events, YouTube is the place or the APT Twitch channel.

Happy Holidays to all! Thank you for being a part of another great APT year! We will be back quicker than you can blink with the APT Kickoff Vietnam coming in January 19 – 28, 2018 at the Pro Poker Club in Ho Chi Minh City. We look forward to seeing everyone there!

Stay tuned for all the APT events coming your way in 2018!