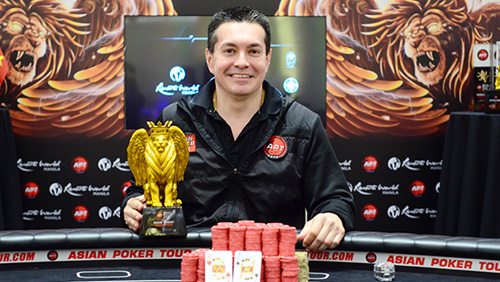 Manila, September 19, 2019 – After five days of grinding and shoving, Peru’s Yohn Paredes emerged as the Asian Poker Tour’s newest MAIN EVENT champion. He entered the Final 8 day at the bottom, clawed his way up and eliminated four players to ship his first-ever major poker title. He was awarded the APT Main Event Trophy, APT Championship Ring, and PHP 4,369,000 (~USD 83,700).

“I can now retire from poker. I accomplished my poker goal. It’s what I’ve been working towards. I started playing around 5-6 years ago and I’ve done well even if my record isn’t that long. I’ve always felt I could win a big tournament. I’m a completely different player today than I was back then. Back then I was just playing hands and feeling I was getting unlucky but it’s a game, stacks, people, positions, it’s everything that you can think of and it’s always a dynamic that’s changing. I feel fantastic! It’s nuts! It’s been a long journey and I guess bottom line is if I can win, anyone can win.”

Paredes’s road to stardom was no smooth sailing. He had to overcome a huge deficit coming in as the runt of the pack.

“My toughest challenge was to myself. It was maintaining discipline and playing the strategy for my stack with position. At the final 8 I was playing my stack based on the big blinds. I came in with less than 20 and so it was basically three-bet shove and pick my positions and try to money up. At the end of the day, I got good hands and a couple of lucky runs so boom!”

After three uncalled shoves, he built up enough to rail short-stacked Hubert Spiess (6th place). His next pick up was a controversial one. Time was paused and the video reviewed to determine a proper ruling. It eventually led to the fall of Tetusya Enoki (5th place), and in turn the chip lead to Paredes for the first time since the tournament began.

“At first I was shocked at the call, I thought he was just pulling back his chips. But I heard him call so I thought he might have had a six (for trips) coz that’s the only one I was worried about.” 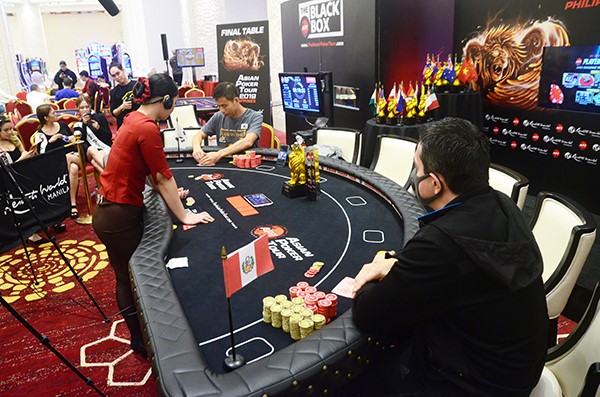 At three-handed, Paredes railed entering chip leader Arvhin Maliban (3rd place) with K♦ Q♦ over J♦ 7♦ on a board A♦ 4♦ J♥ Q♥ 8♥. Paredes check-shoved at the flop and Maliban snap-called.

Despite claiming his third head, he was still behind Sim Jae Kyung aka Simba at heads up: Simba 7,155,000 and Paredes 5,720,000. Players agreed on an ICM deal with money aside plus the trophy and the ring.

Heads up lasted 28 hands. On Heads up Hand #11, Paredes evened it up with Q♣ J♣ earning a good pot on a board A♥ A♦ K♣ J♠ 8♣. From there, leadership went back and forth until Heads up Hand #23 where Paredes was awarded a very large pile that also drew a bit of controversy.

Recapping the action, Paredes limp-called a 500k bet to see the flop 10♥ 10♦ 2♦. However the board also had a fourth card exposed 8♥. It was ruled that the card was the burn. Simba was unhappy with the ruling. The hand continued with Simba firing a 600k bet, called by Paredes. On the turn K♠, 1.150m bet by Simba, called again. Then on the river A♣, Simba bet 1.2m, Paredes jammed, inducing a quick fold. Simba didn’t show but in the stream he had 8♦ 3♥ while Paredes had K♣ 10♣ full house.

This was Paredes’s fourth APT Main Event final table appearance and first major live  win. It took ten hours and 178 final day hands to get there. Congratulations to the newest champion Yohn Paredes! He now leads the APT Player of the Series race.

You can relive the Final 8 race via our media channels APT Twitch and APT YouTube. You can also read up on the previous days action via our Live Updates. 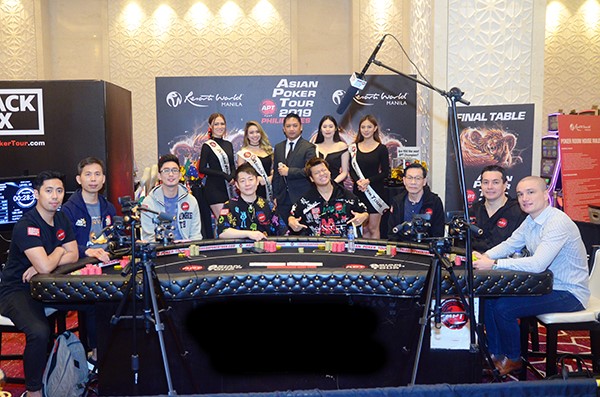 The Main Event ran from September 13 to 17 at host venue Resorts World Manila at the new Grand Wing. It was Philippines series record-breaker with 515 entries. With buy-in at PHP 55,000, the prize pool shattered the PHP 10m guarantee for a much sweeter PHP 24,977,500 (~USD 480,000). 52 players earned their respective share with the top 8 cuts claimed today.

All ITM players earned points towards the APT Player of the Series race. You can view the standings here.

You may also view these on APT.

For more information, you may email [email protected]