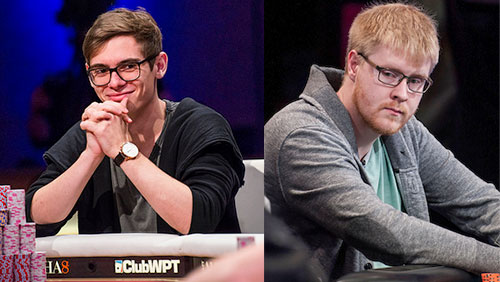 Two tales of excellence from the dirt track at PokerStars with Fedor Holz winning the opening event of the High Roller Series, and Paul Vas Nunes winning the Sunday Million for the second time.

In a week when an unidentified online poker player posted a graph showing $7.4m in online poker winnings, earned over a five year period, without ever really working on my game outside of the tables, Fedor Holz reminded us that cumicon isn’t the only enigma in poker.

While cumicon is an inspiration to the serial procrastinators and lazy bastards in the world, Holz is the complete opposite. The German star, who has earned $26.5m in live tournament earnings in the same timeframe, has developed a worth ethic that’s smarter than anyone has ever created before, and at a time when people tell you the game is harder than ever to beat.

For now, unless you are a close confidant of Holz, the tinted windows on the tricks of his trade hide the secrets. All we can do is peer into his world hoping for a scrap of something.

On Sunday, PokerStars armed themselves with an $11m GTD, High Roller Series, in a bid to beat off the advances of partypoker in that lucrative niche, and ironically, it was a partypoker ambassador who is now courting headlines throughout poker media as a result of that event.

Holz won Event #1: $2,100 NLHE, $1m GTD. The enigma defeated 442 players (no mean feat) to secure a $178,498 payday, beating 88maca88 from Argentina. partypoker ambassador, Patrick ‘pad1161’ Leonard, finished sixth. Both party guys founded bitB Staking, so I imagine Leonard is one of those fortunate enough to be the jacket on Huggy Bear’s back so to speak.

When PokerStars first tweeted about the launch of the PokerStars High Roller Series, Holz was the first big name to ask for further details. With the festival raging on until Dec 4, don’t be surprised if we see more coinage added to Holz’s impressive online tournament scoreboard.

As part of PokerStars High Roller week, the online poker room has increased the maximum buy-in for their Spin & Go games to $500, the highest amount ever afforded a player since the lottery style games came into being when Winamax created Expresso Poker back in 2013.

Long before Fedor Holz began winning the biggest buy-in tournaments in the world, I imagine one of his earliest goals was winning the PokerStars Sunday Million.

Given his current financial stability, I don’t think that will ever happen, but it has happened for Paul “pvas2” Vas Nunes – TWICE!

Yup, the online grinder from Surrey in the UK (the birthplace of Sir David Attenborough no less) booked his second Sunday Million win while millions of you were in church this weekend, seven years after shipping his first title.

The pair left $20,000 in the middle of the Coliseum, and after a few headlocks and one almighty kick in the bollocks it ended up in the bank account of Vas Nunes.

Vas Nunes, who has to contend with being a Type 1 Diabetic when competing for long hours, adds his two Sunday Million titles to his Spring Championship of Poker (SCOOP) title, and Sunday Warm-Up win. All told, Vas Nunes has banked $2.5m in online winnings.

That’s the lolly Vas Nunes has won competing live where he counts a Unibet Open win and a Grosvenor United Kingdom Poker Tour (GUKPT) title amongst his belts and whistles.