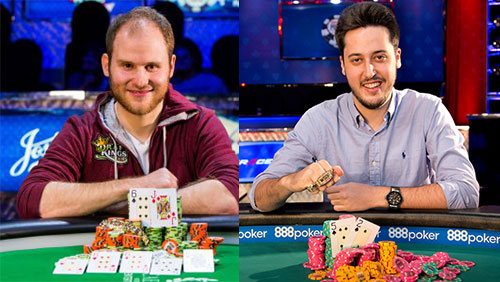 Two of the biggest buy-in players in the game rise to the top of the two final events of the partypoker LIVE Caribbean Poker Party with Sam Greenwood winning the Main Event and Adrian Mateos taking down the Finale.

Sam Greenwood will have a cherry seed of pride stuck in the craw of his throat after putting in a performance of a lifetime at the partypoker LIVE Caribbean Poker Party.

The Canadian high stakes pro banked close to $1.5m after three stunning performances, surrounded by some of the greatest poker players in the Milky Way.

Before partypoker LIVE shot out of the birth canal, the online poker room was known more for its missed guarantees than the ones they landed. These days, they are not lagging; they are speeding forward on the hooves of a thoroughbred racehorse.

When they say they will guarantee $5m, they hit it.

The Punta Cana party was no exception.

1,061 entrants once again cementing partypoker in their position as the seven-figure kings of live poker in the $5,300 Main Event.

Many fine warriors made the final table; two deserve special mention. Preben Stokkan, who beat Greenwood and Jonathan Little to win the opening $10k for $275,000, picked up another $150,000 for a sixth-place finish. And PokerStars Team Pro, Felipe Ramos, continued a run of form that has seen him make five major final tables in the past two months, securing a fifth-place finish for $220,000.

But it was the Russian battering ram Andrey Shatilov who would prove to be Greenwood’s toughest challenger when it came to the home of the $1m first prize. The pair exchanged spear and sword in a heads-up encounter that lasted three hours before Greenwood finally defeated his opponent.

“I won because I was on the right side of the cards,” said a humble Greenwood.

Greenwood is a monster.

The Canadian picked up a seven-figure score for his win, but it still didn’t rank as his best result (Season 7 European Poker Tour (EPT) €50k High Roller for $1,023,000, finishing runner-up to Fedor Holz in Barcelona). Greenwood has now earned over $2m playing live tournaments in each of the past three years and has $6.8m in lifetime earnings.

The decision by Winamax to slap a patch onto the puffed out chest of Adrian Mateos is paying off like a New York sandwich.

The young Spaniard’s first tournament appearance for the French online poker room came in Asia where he picked up close to $1.4m dancing on the red-hot coals of three big buy-in events in the Triton Super Series and the Asia Championships of Poker (ACOP).

Money wired to his ever-bulging account, Mateos jumped on a jet plane, landed in Punta Cana, and made it his altar. The man with three World Series of Poker (WSOP) bracelets finished 4/43 in the $25k Super High Roller for $110,000 and then took down the $5,300 MILLIONS Finale event for $250,000.

If you think Greenwood has a live tournament resume that looks like an ice cream pie then check this out:

Mateos has earned over $11.3m in live tournament earnings, $5m of which has come in an increíble 2017.

A few other riders who travelled as far as Chips did on their 1970s motorcycles were Dylan Linde (14th), Barny Boatman (15th), and Tony Cousineau (17th).