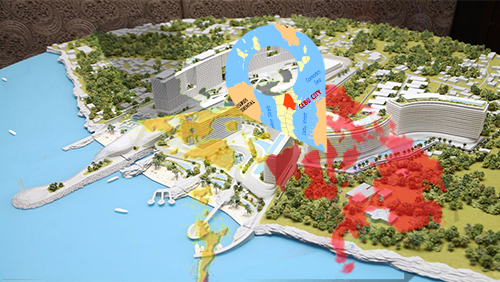 The Cebu City Council (CCC) has backed the bid of Philippine property developer Universal Hotels and Resorts Inc. (UHRI) to construct an integrated resort outside Manila.

Cebu Daily News reported that, by a 7-5 vote, the CCC has endorsed UHRI’s application for a casino license from the state-run Philippine Amusement and Gaming Corporation (PAGCOR).

UHRI reportedly plans to turn the 39,854-square-meter Kawit Island, which is originally reserved for quarantine services and maritime hospital of the Department of Health (DOH), into a world-class integrated resort with a 1,000-bed hotel, casino, convention center and restaurants, among other amenities.

But for the project to move forward, UHRI needed to seek the blessing of the CCC and, afterwards, PAGCOR.

In his letter request, UHRI President Frederick Go told the council that his firm plans “a world-class development that will stand as a landmark in the Visayas Region and the country. We submitted an unsolicited proposal for the City’s kind consideration.”

Councilor Eugenio Gabuya Jr., who drafted the resolution on the matter, clarified that their endorsement only covers UHRI’s bid for a casino license. He said UHRI will need to get separate approval should they decide to pursue the development once the firm secures PAGCOR’s approval.

Raymond Alvin Garcia, one of the five councilors who voted against the endorsement, warned of possible legal ramifications as a result of the council’s approval of the request.

He said that the council seemed to have already favored UHRI in the development of the reclaimed land instead of allowing other property developers to bid on the rights.

“We’re being presumptuous. We’re giving authority to them as if UHRI is the winning bidder of the project even if their unsolicited proposal will still have to go through Swiss Challenge. It’s like we’re doing them a favor without even going through the whole process first,” Garcia said, according to the news outlet.

Councilors Jose Daluz III echoed the sentiment of Garcia as he urged his colleagues to first look into the restrictions on the use of Kawit Island since the property was only donated by the DOH.

“This endorsement should be part of a bigger memorandum of agreement (MOA) on the P18 billion [US$356.05 million] facility proposed there. It shouldn’t be done in advance,” Daluz said.

Early this year, PAGCOR chair Andrea Domingo floated the idea of replicating PAGCOR Entertainment City in Cebu as she believes Manila is slowly becoming too congested for another multi-billion integrated casino resort.

In May, PAGCOR announced that it had awarded a provisional casino license in Cebu to Philippine casino operator Udenna Development Corp. Udenna held the groundbreaking ceremony of its US$341-million Emerald Resort and Casino project in late July.