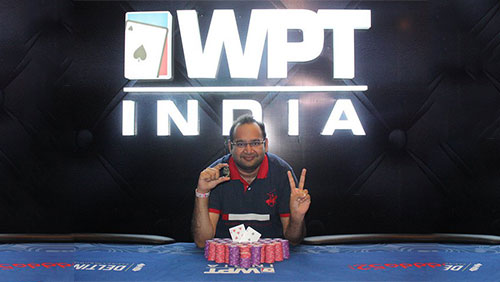 Poker in India continues to remind us that it has a place in the global community after the World Poker Tour (WPT) and the Deltin Royale Casino in Goa hosted a successful WPTDeepStacks India Main Event.

Arora didn’t hold on to the chip lead for long. In the first few hands, Mantri, facing enormous pressure from his opponent, successfully called an all-in for his tournament life, holding the second pair, and Arora showed the bluff.

The hero call gave Mantri a dominant lead, Arora doubled to claw some chips back but got was caught with his hands in the cookie jar for the second time, bluffing with jack high when Mantri was sitting behind a flopped two-pair.

Previously, Mantri had only cashed in two live tournaments, his last, a year ago when he finished 4/161 in the Deltin Poker Tournament in Panjim.

The next Asian stop for the WPT crew is the MGM Grand Sanya for the WPT Sanya Main Event, Nov 16-21. Then we have the inaugural WPT Japan Main Event Nov 23-26.

It’s a busy time for poker in India.

I guess you could call it a boom of sorts.

The WPT has just packed up their tables and chairs, and the focus will now fall on the Match Indian Poker League (IPL). The event takes place at the Playboy Club in Mumbai Nov 17 & 18th, and you can watch the action on MTV.

Here is the #PokerisaSport TV commercial released to promote the event.

When news of the Match IPL first hit the airwaves, there were eight franchises, but that’s since been cut down to seven after organisers dropped Pune Knights from the event.

We regretfully announce that @puneknights has been terminated from @matchIPL due to non fulfilment of contractual obligations.

It’s not the only spot of controversy the Match IPL has endured during the build up. The Board of Control for Cricket in India (BCCI) threatened legal action over the use of the acronym IPL, because of the cricket Indian Premier League. And Match IPL officials had to apologise for falsely advertising that the likes of Faraz Jaka, Victoria Coren-Mitchell, and Luke Schwartz were going to compete in the event.