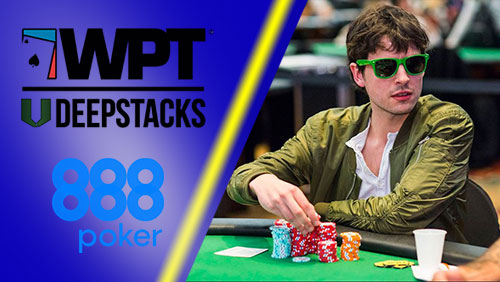 partypoker has 888Poker locked in their crosshairs, but rather than start shaking like a gorilla with a banana taken from his hand, 888Poker is meticulously growing brand awareness by partnering with some of the biggest brands in the business.

888Poker and the World Poker Tour (WPT) has announced a partnership that will open up a tributary into the WPTDeepStacks sea beginning in the online pools of 888Poker.

The first event you can qualify for via 888Poker is the €1,500 buy-in, €500,000 Guaranteed WPTDeepStacks Berlin at the Casino Spielbank Jan 5 – 8, 2018. 888Poker is putting on weekly qualifiers on Monday and Thursday up until Christmas Eve. The Monday satellite is a $109 buy-in seat-only qualifier, and the Thursday satellite is a $160 buy-in $2,400 package qualifier. You can qualify for both of these events for as little as a cent in feeder satellites.

888Poker is having a good month.

Not only is the online poker room the official sponsor of the 2017 World Series of Poker Europe (WSOPE), but one of their ambassadors Dominik Nitsche gained a lot of airtime during his victory in the €111,111 One Drop High Roller where he earned a career-high €3.5m.

The WPT has wrapped up its first-ever gig in Uruguay.

The event was filmed for eventual inclusion in the Season XVI coverage on the FOX Sports Regional Network and the Argentine, Juan Gonzalez, took the top prize of $109,860.

The WPT partnered with Brasil Poker Live and the Aconcagua Poker Network, the latter sending over 200 players to the event, including the winner.

The event pulled in an impressive 410 entrants, and the final table contained a few South American heavyweights. Mario Bonanata, who finished fifth, won the High Roller at the Brazilian Series of Poker (BSOP) in February. Brian Kaufman, who finished fourth, was a revelation at the PokerStars Championships in Barcelona earlier this year after making the final tables of the Main Event and the National Championships, netting over half a million euros in the process.

But neither of those card sharps made the heads-up stage. That belonged to Gonzalez and Kaue Vinicius De Souza. Gonzalez began with a 7.5m v 4.2m chip lead, and it was all over after four hands. Gonzalez found pocket jacks, De Souza found pocket tens, and it was time to light a cigar for Gonzalez.

It was only Gonzalez’s third career cash, his last being a 49th place finish in the European Poker Tour (EPT) Grand Final in Monte Carlo, way back in 2012.