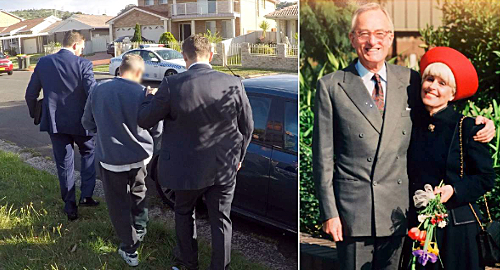 You’ve got to hand it to Australia, as its intersection of sports betting and law enforcement is rarely dull, and is generally good for a few major car crashes.

On Thursday, Aussie media reported that police had laid murder charges in the extremely cold case of Sydney bookmaker Charles Skarratt, who was found stabbed to death inside his garage three days before Christmas 1989.

Police reported that Skarratt (pictured right), a familiar face at Sydney’s greyhound racetracks, was attacked after stepping out of his car around 1am, after which he was bound, assaulted, stabbed and robbed of approximately $25k cash – the bookie’s take from the previous night’s racing.

The case had gone unsolved until Unsolved Homicide Squad detectives reopened the file last year. New DNA tests of some blood found at the crime scene matched a profile on file, leading to the arrest of the suspect on Thursday morning.

In a supremely ironic twist, the suspect is 58-year-old Terry Hickson, son of the late Jim Hickson, a reformed gambler who founded the Gambler’s Help Line in 1995. The elder Hickson and his wife ran the service from the same house at which Terry Hickson was arrested on Thursday.

(Not to trivialize a serious matter, but the Aussie media is showing remarkable restraint in covering this issue. Can’t imagine them doing the same if the son of a bookmaker was accused of murdering an anti-gambling campaigner.)

Hickson appeared in court later on Thursday, where he was denied bail due to the prosecution arguing that Hickson had “a propensity for violence” and prosecutors had “significant fears” for the safety of some witnesses who will reportedly testify for the prosecution.

The prosecution said Hickson was motivated to kill Skarratt for “financial gain” and claimed there was “significant planning” behind the murder. Chief Inspector Chris Olen said police “suspect others are involved in this offence and we are actively pursuing lines of inquiry in that regard.” Hickson’s next court appearance will be on December 14.

BETTING WHALES IMPERSONATE COPS, EVERYONE GETS CHARGED
Meanwhile, a pair of Australian betting whales who were barred from wagering with Aussie operators are facing dozens of charges after getting caught using 20 police officers’ identities to open hundreds of online betting accounts, through which they reportedly wagered up to $1m per week.

The scam, which involved pro bettors Darren Azzopardi and Stephen Fletcher, was rumbled in 2013 after the two cops who recruited their fellow officers into the scheme – paying each $500 for the use of their driving licenses, Medicare cards, credit card and banking info – admitted their involvement.

On Thursday, the four main principals were all charged with multiple counts of dishonestly obtaining a financial advantage by deception. Fletcher was hit with 78 counts, Azzopardi earned 42, while the two (now former) cops – Marc James Smith and Anthony Paul Williams – are facing 116 counts and 12 counts, respectively. The officers who supplied their IDs for the scam are facing disciplinary action.