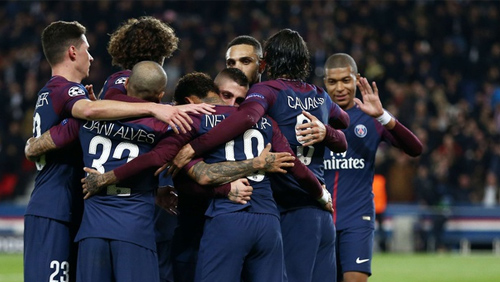 Paris St Germain is the favourite to win the Champions League after beating Anderlecht by a landslide, Chelsea becomes the first English side to lose in this year’s competition, and penalty confusion at Old Trafford.

Man Utd maintained their 100% record in the Champions League this season with a two-nil win over Benfica.

The Portuguese champions arrived at Old Trafford without a single point earned in their first three games, and it remains that way after United won once again in front of their home fans.

The Reds should have opened the scoring in the 14th minute when a rampaging run from Anthony Martial ended in the penalty area dirt. The most expensive teenager in the world dusted himself down and promptly scuffed his penalty kick enabling the talented Mile Svilar to save comfortably.

Four minutes after Martial’s shocking penalty kick, Benfica moved up the other end of the pitch and nearly took the lead. Diogo Gonçalves cut in from the left before releasing a thunderbolt towards goal, expertly tipped over the bar by the world-class David De Gea, proving once again what a ridiculous decision it was not to name him the FIFA Goalkeeper of the Year.

It looked like the stalemate would continue into the half time interval until some good fortune fell the way of Nemanja Matic. The defensive midfielder released his shackles, moved forward and struck a daisy-cutter into the foot off the post, and the ball hit Cvilar on the back and ended up in the net.

65-Minutes gone and Benfica should have scored an equaliser. Eric Bailly, who has been out for most of the season through injury, pushed a lazy pass into the path of Raul Jiminez on the edge of the United box but the Benfica star could only hit the post.

Then the moment that gave the journalists something to write about this morning. Marcus Rashford replaced Martial, and in the 77th minute, the young Englishman was brought down in the box for a second United penalty.

With Martial on the bench, a confident Romelu Lukaku stepped up to take it. Then Ander Herrera intervened and looked likely to take it before Daley Blind finally took the kick to score the winning goal.

After the match, Jose Mourinho told the press that Blind took the penalty because he was the man banging them in during training. Lukaku has now gone seven games without a goal.

In the other Group A game, CSKA Moscow moved level on points with FC Basel after a 2-1 win in Switzerland.

Bookmakers have made Paris St Germain favourites to win the Champions League after another scintillating performance at the Stade de France.

The 5-0 victory means PSG are unbeaten in their first four Champions League games, scoring 17 goals without conceding. A new record, beating the one that dated back as far as the 1989/99 season when Man Utd scored 16 goals in their first four games.

The star of the show was Layvin Kurzawa, a left-back, who became the first defender in Champions League history to score a hat-trick. Kurzawa turned up in the box to score his first goal in the 52nd minute before adding two more in the 72nd and 78th. Marco Verratti and Neymar scored the games other two goals.

PSG will finish as group leaders, and Bayern Munich will join them in the qualifying stages after beating Celtic by 2-1 in front of the FIFA Fans of the Year. Arjen Robben said the atmosphere at Celtic Park gave him goosebumps. A 77th-minute header by Javi Martinez sealed the points for the German champions after Callum McGregor’s goal had cancelled out Kingsley Coman’s opener.

Chelsea can thank lucky rabbit’s feet that Atletico Madrid is having a nightmare after Roma humbled the English Premier League Champions, 3-0.

Roma’s victory moves the Italian side into the top spot in Group C, one point ahead of Chelsea. Qualification is still extremely likely for Chelsea come what may after Atletico have now failed to beat minnows Qarabag dropping four points in their two ties against the Azerbaijan Premier League champions.

Stephan El Shaarawy scored two first-half goals, and Diego Perotti made it a comfortable evening with a 20-yard drive in the 63rd minute. The loss is the first for an English club in this year’s Champions League.

Next up for Chelsea?

Barcelona and Juventus remain on course to qualify for the knockout stages despite both failing to win on Tuesday night. Barcelona leads the group after a goalless draw in Greece against Olympiakos. Juventus remain in second place after a 1-1 draw in Sporting.