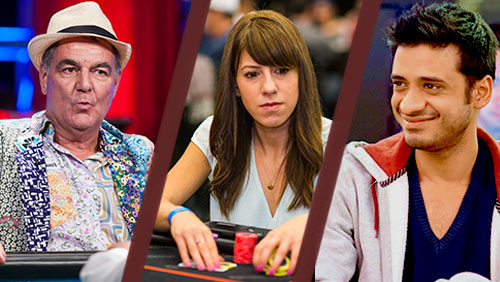 Three short stories including the star of the World Series of Poker Main Event, John Hesp, returning to earth, Kristen Bicknell on top of the world, and another new face for the Global Poker League in India.

The Beatles didn’t have a very high opinion of 64-year-olds with all their talk of knitting sweaters by the fireside, digging up weeds, and mending fuses.

That’s not the life that John Hesp wants to live.

The 64-year-old caravan salesman from the north of England was the star of the 48th Annual World Series of Poker (WSOP) finishing fourth from a field of 7,221 players in the Main Event, netting $2.6m.

I’ve been around long enough to know there was an expiry date on the side of the excitement. Hesp was a phenomenon rarely witnessed in the grandest competition of them all, but his post-Main Event success was never propitious.

And so it proves.

All seven of Hesp’s previous cashes before the $2.6m hit came in his Sunday night £10 rebuy at Napoleon’s Casino & Restaurant in Hull, and so you shouldn’t be shocked to hear his first cash since Vegas also came in the same event. On Sunday 1 Oct, Hesp finished seventh from a field of 61 entrants to win £200.

I love a man who never forgets where he comes from even if at 64 he probably forgets a lot of things, according to Paul, John, Ringo, and George.

Kristen Bicknell on Top of the World

Kristen Bicknell is the Female Global Poker Index (GPI) World #1, replacing Cate Hall at the top of the charts this week.

Bicknell has been in fine fettle since signing with partypoker as an ambassador of the brand. The multiple World Series of Poker (WSOP) bracelet winner has earned close to $300,000 playing live tournaments in 2017.

Here is her highlight reel:

It’s worth noting that the most proficient female poker player of all time, Vanessa Selbst, is currently ranked 3,381.

I only read the twitter accounts of two people on a daily basis, and one of them is Alex Dreyfus, so I know the GPI owner, and founder of the Global Poker League (GPL), has been in Mumbai making sure that progress on the forthcoming GPL India is heading in the right direction.

It’s been a busy time for the GPL, with a beautiful looking new website, and GPL China in full swing. I hope to get some downtime with Dreyfus to talk about his plans for the future shortly.

In the meantime, Aditya Agarwal is the latest big name to sign up for GPL India. The PokerStars Team pro will take charge of his hometown team the Kolkata Creators. Speaking to India’s Poker Guru, Agarwal said his strategy is to choose players primarily from Kolkata. You can check out his interview here.