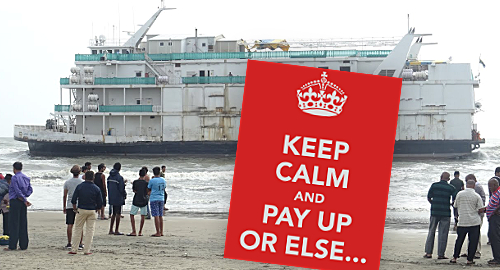 Casinos in the Indian state of Goa will finally be forced to deny entry to local residents under the terms of new gambling regulations.

On Friday, the Times of India reported that the Goa government’s law department had given in-principle approval to draft gambling regulations. The proposed changes to the 2012 Prevention of Gambling Act must now be approved by the home minister before being submitted to cabinet for the final okay.

Among the changes in store for the state’s five floating casinos and the dozen or so land-based venues is a blanket ban on all Goans setting foot on a gaming floor. This restriction has technically been on the books since the Act was passed but legislative lethargy meant the rules were never formalized.

Casinos will also face increased oversight via the appointment of a new gaming commissioner, who will be selected from either the state government ranks of the Indian Administrative Service. In addition to ensuring that Goa-licensed casinos mind their Ps and Qs, the commissioner will also be tasked with uncovering any efforts by casinos to disguise their true gaming revenue with the intent of reducing their tax obligations.

In July, Goa’s Chief Minister Manohar Parrikar announced that the five floating casinos would have to move their operations onshore within three years. However, the government has yet to figure out where these shipboard operations will land.

The state’s latest floating casino – Golden Globe Hotels’ MV Lucky 7 – is still mired on the Miramar beach sandbar it got stuck on in July while being towed to its intended mooring spot on the Mandovi river. Last week, the Goa State Pollution Control Board (GSPCB) sent Golden Globe a demand to immediately submit a bank guarantee of Rs 10m (US $156k) to cover environmental damage caused by the stuck vessel.

This is the second request/demand that GSPCB has issued to Golden Globe, the first – made last month – having gone unanswered. GSPCB secretary Levinson Martins warned that failure to respond to this second missive meant “necessary action as per law would be initiated” against the owners.