Nothing shows that you hit the big leagues like a nice relaxing government fine for committing what politicians have decided is a “crime”. The business of avoiding pretend crimes can be humorous and only slightly annoying in the best case. Think those repetitive disclaimers about forward-looking statements CEOs have to make before presenting their company to investors. Or it can burden the entire global economy and lower the standard of living of the entire human race in the worst case. 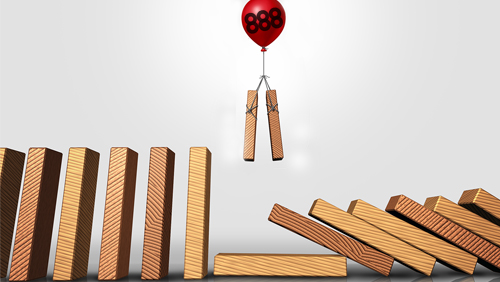 888 last week joined this coveted group of companies forced to pay money to the UK Gambling Commission. Now the ruling class can look like they care even more about the downtrodden and maybe get another seat in whatever parliament or something.

Alright, so technically the “crime” was not doing enough to stop problem gamblers. Apparently one guy stole £55,000 from his employer so he could keep gambling. In a world run by objective law rather than law made up through political wrangling, everyone is responsible for their own behavior and this is not their direct responsibility. 888 probably does have a vested interest in keeping problematic gambling addicts away from their systems if only to avoid bad press and tarnishing their brand name. Most companies that intend on surviving long term have an interest in keeping PR liabilities out of their hair. There is no need for extra government protection in these cases, which just amounts to government looking for its slice of the loot.

Shell companies with no brand name and no long term plan looking to swindle people for as much as possible as quickly as possible and then pop out of existence like a quantum flux are a problem, but these companies have no brand recognition so anyone who falls for them would have lost their money some other way anyway. You can’t protect people from themselves indefinitely. If they want to be swindled, eventually they will be.

888 will suffer whatever it suffers because of being associated with problem gamblers now and that is enough punishment from the free market. The fine is just bureaucrats looking to pick up a nice steak dinner and pat themselves on the back. The £7.8M that 888 will be paying, will it go towards reimbursing the guy who had £55,000 stolen from him? I seriously doubt it. Will it go towards Gambling Addicts Anonymous programs? Fah! It’ll be lost in the budget, or used to give the bureaucrats at the UK Gambling Commission some nice bonus checks.

According to the details of the case, 888 may have been negligent in some instances, specifically by allowing clients who chose to self-exclude from their platforms, to gamble. If so, this would be a breach of contract with these clients and some form of restitution should be payed to them rather than to the UK Gambling Commission. Why should a bureau get money when someone else’s contract was breached?

The bigger picture is that when the government and its bureaus come after you, it’s a sign that you are succeeding. Fines, even enormous ones, are only levied in proportion to what a company can afford to pay. Otherwise the government kills the golden goose. The only exceptions are if the crime is real and so vast that the government just takes everything you have left and you go out of business completely. Think Enron, WorldCom, or Bernie Madoff.

But tax “crimes” (Apple $14.5B), or antitrust “crimes” (Alphabet $2.7B) or failure to protect customers from themselves (888 £7.8M), or failure to tell your customers loudly enough that your product is probably bad for their health (Big Tobacco $206B) do not generally harm business for long. Tobacco stocks, for example, are among the best performing asset classes ever, and they suffered by far the most gargantuan fine of over $200B ever levied.

Meh, the Federal Reserve can print more than that much money in a single week.

Apple figured out a way to keep more of its own money and keep it away from politicians by funneling it through Ireland, and this drew the biggest fine for a single company ever, but didn’t make a dent in its operations. Alphabet is doing fine and its $2.7B fine for allegedly favoring (*gasp*) its own shopping network in search results, isn’t even a drop in the ocean.

Point being, 888 should be proud of this fine. They’re not Enron or WorldCom, they barely did anything wrong at all, and the fact that they are being targeted means they’re getting somewhere. In fact, the fine being bigger than most industry experts expected by nearly an order of magnitude should also be worn as a badge of honor. It means the UK Gambling Commission thinks 888 can handle larger extortions because they are in better financial shape.

Companies that get to this level should always keep some petty cash in their corporate sock drawer for when government demands another payoff and just count it as one of the costs of doing business. Just like the mafia comes knocking at your door sometimes demanding protection money but only when they know you can pay it, so the government knocks at your door accusing you of hurting the innocent, demands money, and then goes out and spends it on bank bailouts.