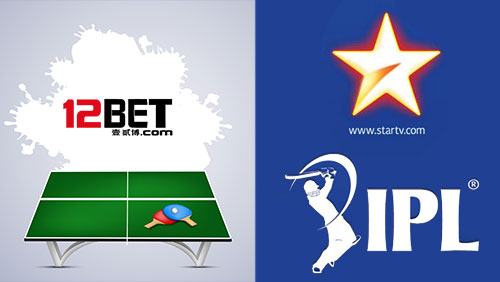 12BET continues to mop up the sponsorship deals in the minor leagues of professional sport with another World Cup partnership signed in blood this week.

Table tennis is not the only minor league sport that 12Bet has covered in patches. Back in July, they brokered a deal to sponsor Badminton’s World Federation 2017 World Championships, and in May struck a deal to sponsor the World Cup of Pool.

Tiddlywinks is next methinks.

Just to prove that there is no part of the world of sport that a 12BET logo can’t reach, in early August, the online gambling company became the first ever to secure a deal to sponsor the sleeves of an English Premier League (EPL) side, when they signed a deal with West Brom.

Cricket, it makes me dozy just typing it, is big business in India with the Indian Premier League (IPL) the most watched sporting league in the country, and the national sport.

For the past ten years, Sony held broadcast rights for IPL coverage, but they just lost that privilege in a tug of war with 21st Century Fox’s Indian media and entertainment company Star India Private Limited.

24 corporations picked up the invite to tender, but only 14 of them turned up to bid. Rahul Johro, CEO of the Board of Control for Cricket in India announced that Sony and Star India would compete for the TV broadcasting rights, with Reliance Jio, Airtel and Facebook voting for digital rights. Star India gazumped the lot with a successful consolidated bid to take both forms of coverage under their tutelage.

The winning bid was Rs 16347.50 crore ($2.6 billion). When Sony won the auction a decade ago, they paid a billion dollars for the broadcast rights. Sony offered $1.7 billion this time. Mark Zuckerberg and the gang offered $600m for the digital broadcast rights.

Over 1.3 billion Indians watched the two-month league last season. According to KPMG, cricket is responsible for 61% of all team sponsorship deals in India.

Rumours have began circulating that 12BET are interested in sponsoring the IPL’s bails.