Home / Poker / A suicide every 40-seconds: partypoker is doing something about it 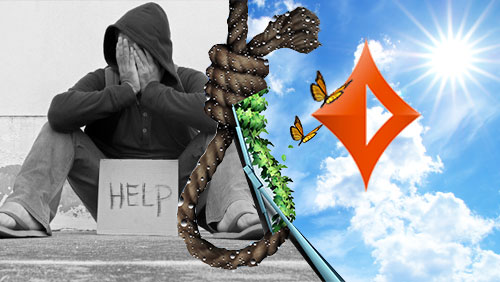 The online poker giant partypoker is partnering with a collection of Ireland’s finest to improve the lives of the homeless and those suffering from suicidal impulse.

Last week was a tumultuous one.

I crossed the Atlantic with a 10-month-old baby vying for my undivided attention, I have assimilated into the Korean culture as best this English council estate kid can, and three people have told they want to kill themselves.

For most of us, like uranium atoms, the thought of suicide never enters our head. It’s not that life is precious, or any of that clichèd crap, it’s that death is, well, death is pretty fucking final.

But once every 40-seconds the thought is the last thing that enters someone’s head. According to the World Health Organisation (WHO) suicide amongst 15-29-year-olds is the second leading cause of death, globally.

And so, today, instead of beating myself up for working in an industry that courts so much controversy, I am going to think about all the lives it saves, and partypoker deserve a special mention on that score.

Between 7-10 September, partypoker LIVE continue their mission to become the best online poker room in the solar system when they set up camp at the Gleneagles Hotel, Ireland, for the partypoker Grand Prix Killarney.

The partypoker LIVE team is promising €300,000 in guaranteed prize money, and given the love of poker in the land of extraordinary people like Bono, Connor McGregor, and the WWE wrestler Sheamus, you know they will smash that figure to smithereens.

But there will be a deeper meaning to the Killarney action.

Close to 800,000 thousand people take their lives every year, and not having a roof over your head will drive you there quicker than most of the screwed up things that happen in your life.

So let’s see if we can do our bit to reduce that number?

Two-thirds of the funds will go to the Capuchin Day Centre, and a third goes to Pieta House, the Suicide and Self-Harm Crisis Center. The Cue Club and Northern/Celtic Poker will donate the reg fees, partypoker will match all rebuy/top up donations.

“Poker for the Homeless has been without a roof over its head for four years, and we’re delighted to have finally found it a home again at Grand Prix Killarney.

“We all know the toll the recession has taken on Ireland and the housing crisis has added further to the problems the most vulnerable in society are facing.

“Over the last decade the Irish poker community, with the help of our many generous friends from abroad, has raised almost €250,000 for Irish homeless causes, and we’ll pull together again to show our support for the amazing work these charities do on the frontline, day-in, day-out, giving desperate people hope.”

When someone tells you they are considering suicide you freeze. An internal debate begins about the most efficient way to deal with the communication that could save or end someone’s life.

It’s not a situation anyone should face, particularly if untrained and unprepared, which is why organisations like Pieta House, the Suicide and Self-Harm Crisis Center, are so important, and why as a new week begins, I have fallen in love with poker all over again.