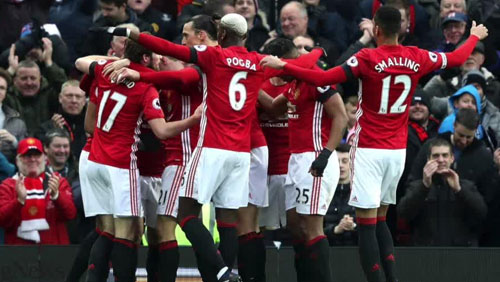 By the time the world had settled in for the Mayweather v McGregor fight, Manchester United was on the top of the Premier League after two knockout blows from substitutes Marcus Rashford and Marouane Fellaini.

Bodog had United at -325 for the win, and with good reason. The victory was United’s fourth on the spin against Leicester, and the 31st match unbeaten at fortress Old Trafford.

Juan Mata had a goal chalked off for offside before seeing Kasper Schmeichel tip a top corner curler beyond the post. Paul Pogba saw three powerful long range shots go wide of the frame of the goal by a small margin.

The second half conjured up much of the same, and United should have gone ahead when the referee judged the former United star Danny Simpson had handled the ball to prevent a cross from the inspired Anthony Martial, but Romelu Lukaku failed to convert. It was the second time the Belgian had missed a spot kick in his last three attempts.

Leicester showed nothing up top, but was resolute at the back, mainly due to the immense performance of Harry Maguire. But in the 70th minute, Henry Mkhitaryan put in a cross, and substitute Marcus Rashford volleyed the ball past the despairing Schmeichel. It was Mkhitaryan’s fifth assist in the first three matches of the season.

Twelve minutes later, and United finished off the Foxes, when the other substitute, Marouane Fellaini deflected a Jesse Lingard shot into the net off his knee, to make sure United began the first three games of the season with maximum points, scoring ten goals, and keeping three clean sheets.

It’s Stoke next for United, where The Potters are unbeaten in their past four games against United, including two victories. Leicester travels to the home of the champions, so it could be a few weeks before the Foxes add to their points total.

Premier League new boys Huddersfield were the Premier League leaders, albeit briefly, after a goalless draw at home to Southampton (United took over after their later kick-off). The bookies had Southampton as the +105 favourites, so it’s a top result for the home side.

The Terriers are now unbeaten in three games, winning two, drawing one, but most importantly, they haven’t conceded a single goal. Southampton also enjoyed a third consecutive match without losing, a great start for their new coach Mauricio Pellegrino.

The only concern for the Saints would be their lack of goals. The draw at Huddersfield was the eighth time they have failed to find the net in their previous eleven league games, and if you stretch further back in time, only Man United has recorded more 0-0 score lines than Southampton since 2015-16. On the plus side, England should be sticking Fraser Forster between the sticks. The Southampton keeper has kept 35 clean sheets since 2014-15, more than any other Premier League goalkeeper.

Huddersfield has an incredible opportunity to maintain their unbeaten start to the season when they face beleaguered West Ham after the international break, and the same rings true for Southampton who face Watford at St Mary’s.

The bookies make Manchester City the favourites to win the Premier League, and they proved they have the grit of champions after a last minute victory over Bournemouth on the South Coast.

City, who began with Sergio Aguero and John Stones on the bench, went behind to a Charlie Daniels cracker in the 13th minute. The ball fell on the left peg of Daniels outside of the left-hand side of the box, and he fired it like a rocket into the top corner.

Six minutes later, and Bournemouth should have enjoyed a two goal cushion as Jermain Defoe found space in the six-yard box only for the City keeper to parry away his lunging volley.

Gabriel Jesus, who was in the side instead of Aguero, played a quick free kick to David Silva, pelted into the box, picked up the return pass, and calmly slotted the ball past Asimir Begovic. It was the Brazilians eighth league goal in 11 games, and his 12th involvement, with four assists.

Bournemouth was a post width away from retaking the lead in the second half when Josh King smashed a shot against the post, and City also hit a post at the other end of the park, when a Nicolas Otamendi header hit the woodwork.

It took until the 97th minute for City to find the winning goal, and it arrived with a generous dollop of controversy. For the second successive week, Raheem Sterling found himself with space in the box, and enough time to put it into the back of the net. His deflected goal sent the City players diving into the away end to celebrate, and on their return to the centre circle, referee Mike Dean sent Sterling off for over celebrating, a bizarre move when you consider, all of the City team were in there with him.

Pep Guardiola was steaming over the decision but will be happy with the three points. They begin the season unbeaten, with two wins and a draw, putting them in good stead ahead of their visit of fellow unbeaten side, Liverpool. Bournemouth has lost their first three games of the season for the first time since 1994-95, and it could be four as they travel to Arsenal after the international break.

Arsenal continued their sputtering start to the season with a humiliating 4-0 drubbing at the hands of Champions League qualification rivals Liverpool.

Roberto Firmino nodded Liverpool into a 17th-minute lead; Sadio Mane made it two before the break, before Mohamed Salah, and Daniel Sturridge completed the rout in the second half.

It’s the Gunners second defeat on the trot, after their 1-0 loss at Stoke last weekend. Arsene Wenger chose to leave Alexandre Lacazette on the bench, instead preferring to start with Alexis Sanchez, and the Frenchman must have been wondering if he had signed for the wrong club.

Wenger insists that Sanchez will remain an Arsenal player by the time Thursday’s transfer deadline passes, but news reports suggest Manchester City will increase their bid for him in that time. With Alex Oxlade-Chamberlain destined to join either Chelsea or Liverpool this week (the Liverpool fans applauded him when substituted, showing their warmth for the man), the dressing room must feel like a funeral home.

It was a fantastic result for Liverpool going into their tough home tie against title favourites City. Arsene Wenger is in luck. The out of sorts side face a team in an even worse state when they entertain Bournemouth at home.

The Best of The Rest

West Brom and Watford are still unbeaten after their first three league games. Stoke held the Baggies to a 1-1 draw. Former Southampton star, Jay Rodriguez opened the scoring with a debut home goal for Tony Pulis’s side before Peter Crouch evened things up with his 51st Premier League headed goal, more than any other player in history.

Watford drew at home with Brighton 0-0 to keep their unbeaten record intact. Marco Silva will be disappointed with the result despite playing for 76 minutes with only ten men after Miguel Britos left the field after an ugly tackle against Anthony Knockaert. It was his third red card of his Premier League career.

The champions continued to make up for that opening day defeat to Burnley with their second win on the bounce. Chelsea beat Everton 2-0 thanks to goals from Cesc Fabregas and new signing Alvaro Morata. And Spurs still can’t find that Wembley win, drawing 1-1 with Burnley at their makeshift home. Delle Alli put the home side ahead early in the second half, only for Chris Wood to score an injury time equaliser to continue Spurs’ stuttering start.

And at the bottom end of the table, Crystal Palace and West Ham join Bournemouth as the three teams with three defeats in three games. Frank de Boer’s side was beaten at home by Swansea thanks to goals from Tammy Abraham and Jordan Ayew. And West Ham slumped to another defeat losing 3-0 away at Newcastle: Joselu, Ciaran Clark, and Aleksandar Mitrovic on the scoresheet for the Magpies. You can pick up 4/1 on Bilic being the first Premier League manager of the season to get the boot. Frank de Boer and Rafael Benitez are both 2:1 favourites.