Lee Davy gazes into his crystal ball to spy the eight names of Premier League managers he believes will face the sack this season.

The number of Premier League managers with a Chairman’s boot up their ass is dropping, but the average is still 7.6 managers per season.

Two-years ago, I began guessing the names of those who would end up on death row. I always started midway through the season, but always ended up with a decent number of correct guesses. I thought this season I would make my predictions from the off.

Here are the stats for the past five years:

Let’s get to work. 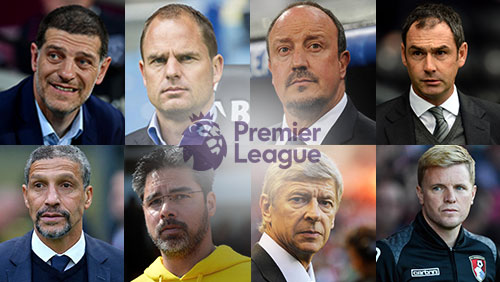 Two years ago, Slaven Bilic was a messiah after leading West Ham to a 7th place finish. Last year, the Croatian spent the vast majority of the season as one of the favourites to face the sack after a brief appearance in the relegation wrangle. Bilic survived, but beginning the season with two defeats is a sure-fire way to get yourself sacked. I don’t think he will make it this year.

Crystal Palace was that bad last season; they sent Sam Allardyce into retirement. His replacement, Frank de Boer, did well in Holland winning four titles with Ajax but Inter Milankicked him out after only three months at the club. Palace has lost their two opening ties, and have done little to strengthen their squad. De Boer will be one of the earliest casualties.

Rafa coul Newcastle from the Premier League drop two seasons ago, but to his credit, he brought them right back up. But the Newcastle squad isn’t strong enough to stay in this league, and when it’s clear that they are going to be in a relegation dogfight, the board will react by cutting the throat of their manager.

Paul Clement was one of my 2016/17 picks, despite joining the club late after Francesco Guidolin exited stage left. Swansea love to sack their managers, and after selling Gylfi Sigurdsson to Everton last week, I fully expect Swansea to struggle this season, meaning the end of Clements short tenure at the club.

I don’t think Chris Hughton will do much wrong, but Brighton isn’t going to gather enough points to keep him in a job. There will come a time when Tony Bloom is forced to turn to a Premier League survival master, and that will spell doom for Hughton who is more used to taking teams down.

Huddersfield has had a great start, winning both of their opening matches without conceding a single goal. Hull did a similar thing last season, but that didn’t stop them from sacking Mike Phelan and bringing in Marco Silva. Huddersfield’s form won’t last. They will soon slide down the table, and when they do, the board will get the guillotine out.

Why did this man not leave in the summer?

It’s clear, most of the fans don’t want to see him at the club, and all the press about Olivier Giroud and Alexis Sanchez makes you wonder what kind of relationship he has with his players.

It’s a long shot, but Wenger has proven his stickability. If Arsenal has a bad season, he won’t walk, and the Arsenal board might have to push.

I can’t help feel that Eddie Howe has done all he can at Bournemouth. In the past two seasons, Bournemouth’s early season form has allowed them to accumulate enough points to ride out their abysmal end of season form. If Jermaine Defoe can have another great season they may stand a chance, but I believe they will struggle this term, and despite being a potential England manager of the future, Howe will be the one who pays for it.