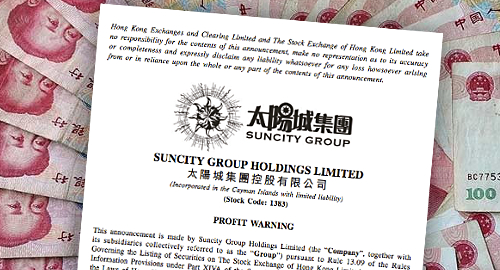 An affiliate of leading Asian casino junket operator SunCity Group has warned investors that it expects to take a significant profit hit when it reports its H1 2017 results later this month.

On Monday, SunCity Group Holdings Ltd alerted the Hong Kong Stock Exchange that a preliminary assessment of its performance over the first six months of the year suggests that it will record “a significant increase in its loss attributable to owners of the Company” in the six months ending June 30.

SunCity claimed the expected losses were due to a number of factors, including a RMB 698m (US $104.7m) loss on change in fair value of derivative component of some convertible bonds, a RMB 412m loss due to litigations against two wholly-owned subsidiaries based in mainland China, additional tax expenses of RMB 99m and a RMB 150m gain from the reversal of impairment loss on trade and other receivables.

SunCity cautioned that these estimates are based on unaudited preliminary assessments, and that the final numbers – which will be released on August 28 – are subject to change. SunCity Group Holdings reported a net loss of nearly RMB 65m in H1 2016.

SunCity Group Holdings recently announced it had paid nearly $77m for a one-third stake in an integrated resort casino project in Vietnam’s Quang Nam province. The Vietnamese casino project, which is targeting a 2019 opening, is a joint venture whose other members include VinaCapital Group and a subsidiary of Hong Kong conglomerate Chow Tai Fook Enterprises.

In other SunCity news, the junket operator recently launched a new mobile phone app that allows high-rolling gambling clients to track their betting activity. GGRAsia reported that the Sun Finance app offers “secure account verification” of rolling chip purchases, win-loss history and other account information for each of the venues at which SunCity conducts VIP gambling operations.

SunCity’s VP of IT Celestino Ali claimed the company was working on another app to help VIP gamblers make travel, restaurant and other entertainment reservations. This Sun Travel app will reportedly make its debut in approximately three months and will allow the company a greater understanding of its clients’ individual spending patterns.