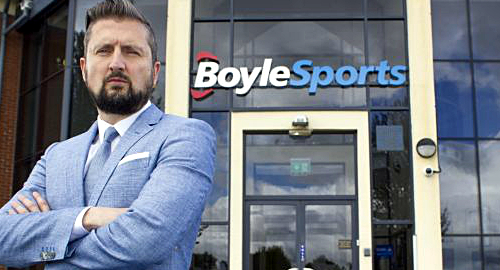 The founder of Irish betting operator BoyleSports has named his son-in-law as the company’s new chief executive.

John Boyle announced last month that he would be relinquishing the CEO’s role in the company he founded 35 years ago. Boyle, who had been CEO since 2012, said he was “ready to step back from the frontline” and suggested that his replacement would be someone within the family-owned business.

This weekend, Boyle confirmed that the company’s new CEO would be his son-in-law, Conor Gray (pictured), who has worked with BoyleSports since 2001. Gray, who began his BoyleSports career as a trainee cashier in a Dublin betting shop, is married to Boyle’s daughter Kerry. Boyle’s two other daughters also work for the company.

Gray has since handled a number of key roles in the company’s, IT, trading and digital departments. In 2013, he relocated to Asia to handle relationship development work before returning to Ireland the following year to become the company’s chief operating officer.

Boyle, who is staying on as BoyleSports chairman, said his willingness to step down from the CEO position was only possible due to his being “confident that I was handing the reins to the right person.” Boyle said Gray was “a successor who can bring not only experience and expertise but also a passion for all things related to bookmaking in general and BolyeSports in particular.”

BoyleSports has been eager to expand its retail operations in England for some time now. Last month, Boyle said the company was “very close” to a deal with an unidentified party regarding a deal involving “at least 100 shops in the UK.”

BoyleSports was among the contenders vying for the hundreds of betting shops that were put on the block following last year’s merger of Ladbrokes and Gala Coral to satisfy the UK competition watchdog’s concerns, but ultimately lost that race to Betfred.