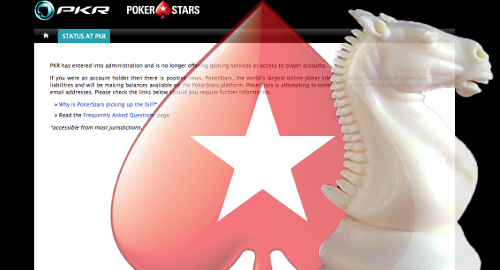 PokerStars has brokered a deal with the administration team handling the PKR liquidation case that will see the online poker room make all 60,000 former PKR players whole.

PKR died on May 5, when the people behind the wheel filed for administration.

It was a strange funeral.

Over 60,000 people attended, more interested in the reading of the $2m will than seeing the coffin lowered into the earth, but there was nothing but respect, for an online poker site that had once dared to be different.

And for those 60,000 people waiting for a skinny looking man in brogues and slacks to let them know how much of their own money they get to keep, I have good news; splendid news; unexpected news – you are going to receive every single cent.

But how did this happen?

Who donned the cape, pulled up the tights, and came to the rescue of 60,000 people who used to get some sort of buzz out of dressing their PKR avatar?

In a blog post written by PokerStars King of Comms, Eric Hollreiser, the biggest player in the online poker world has come to an arrangement with the Administrator dealing with the PKR case to allow PokerStars to take ownership of the player problem, by returning player funds to 60,000 PKR customers.

I always wondered who would benefit from PKR’s death, and it seems like it will be PokerStars, after forcing this mass-volunteerism. The cynics amongst you will no doubt think that PokerStars are buying the hearts and minds of the PKR players, but Hollreiser wants you to know, that although PokerStars benefit from a business perspective, there is a greater story here.

“We’re not doing this to improve our bottom line and we are not acquiring or planning to revive the PKR software platform,” wrote Hollreiser. “We’re doing this because we think it’s the right thing to do for the poker world and to encourage others to join us in putting you, the player, first by segregating and protecting player balances from operating funds. PokerStars is proud that we’re in a position where we’re able to step in and help these players and encourage all companies in the industry to put players first.”

Of course, this isn’t the first time that PokerStars have been the saviours of online poker. In July 2012, when Full Tilt players were staring that the ink black sky hoping a flying saucer would beam them up and stick a painful probe up their bum, PokerStars reached a settlement thought to be worth in the region of $731m to make the Full Tilt players whole.

It’s All About Reputation, Folks

The move is genius; timely, and once again proves that for all the moaning and groaning that I, and other people, make about some of the decisions PokerStars take, there are some smart minds working in those Isle of Man offices.

The signings of Kevin Hart and Usain Bolt, two universally loved, respected, and trusted individuals is a a plan par excellence to get PokerStars underneath the eyes of the radar operator who spends his days looking for the blips in the online gambling marketplace.

This move, to provide PKR players with a set of defribrillator paddles is another part of the overall strategy to recover the reputation that made them the most voluptuous, foxy, and beloved online poker room in the aftermath of that Full Tilt burning fire act.

I Watched my Baby Die

The news comes days after PKR founder, Jez San, gave an exclusive interview with Casinopedia.org stating, investors had ploughed as much money into the brand as they could, and tried in vain to provide a buyer for the platform.

“Very few {poker} companies are making money,” said San who also said it was sad to ‘Watch his baby die.’

One of those few companies who do make enough money is, of course, PokerStars.

The resurrection of sorts will begin in the next few days.