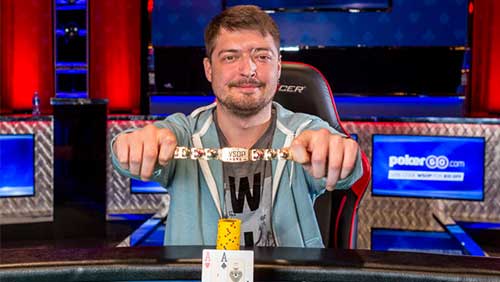 The Russians have won their fourth bracelet, and the UK have taken their third, as the 48th Annual World Series of Poker remains on course for another groundbreaking year.

The $10,000 Six-Max No-Limit Hold’em Championship is one of the toughest competitions of the summer. It’s exterminate or be exterminated. The action is fast, furious, and frenetic. The parade of oddballs that usually illuminate a World Series of Poker (WSOP) event, replaced by nothing but the very best card players in the biz.

But that view isn’t shared by the eventual winner Dmitry Yurasov.

“Easy game,” Yurasov told WSOP reporters with his tongue firmly pressed into his cheek when asked how he managed to snag the gold.

The final day of competition welcomed 24 players with the in-form Charlie Carrel in the chip lead. The young British star would fall by the wayside in 15th place by which time Yurasov had picked up a head of steam.

Yurasov entered the final table with the chip lead, and lopped the head of five of his remaining six opponents, beginning heads-up against Tommy Chen with a 7:1 chip lead. Chen is a solid heads-up opponent, making the semi-finals of the $10k Heads-Up Championship in 2012, but you don’t make up that kind of ground without an insane run of luck. The end came when Chen flopped top pair, holding Q9 on QT8. The money went in on the turn, but Yurasov was holding the rockets.

The only player that Yurasov didn’t eliminate at the final table was the two-time bracelet winner, Kristen Bicknell. The Canadian once again underlining her standing in the game, and what a wise decision it was by partypoker to add her to the ambassadorial team, by finishing in sixth place.

Special mention should also go to Artem Metalidi, who stuck around to act as an interpreter for Yurasov during his winner interview. Yurasov eliminated Metalidi in fourth spot.

Other notable players who dived deeper in this tournament than a swot studying for a nuclear chemistry exam were the best-looking man on the block Dario Sammartino (8th), the main man Connor Drinan (9th), and Daniel Negreanu’s tag team partner Eric Wasserson (11th).

When Chris Brammer was in the rail dodging shoe bombs, and cheering his mate, Chris Moorman, onto victory, I wonder if there was a part of his mind that was thinking: 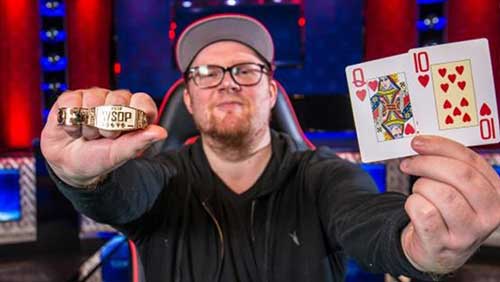 With the blind levels increasing every 30-minutes you had to skate perilously close to the rail in this one. There were more all-in and calls that intelligent Nobel Laureates and Brammer always seemed to have the goods.

It was the first time Brammer had made the final table of a WSOP event in five years. His previous two final tables, both in 2012, ending with disappointing fifth place finishes, and Brammer admitted that his Las Vegas loss hurt for a long time. I imagine the wound has now healed, patched up with $527,555 in prize money, and the accolade of being a WSOP Champion.

The event attracted 505 players, and Brammer brought down Jett Schencker after only one hand of heads-up action. Schenker opened the button with Ajo, Brammer moved all-in with QTs, and Schenker called. The ten fell on the flop, the ace and jack stayed in the deck, and the British rail went wild.

Brammer’s victory cements the UK’s third place position in the most bracelets won category behind USA and Russia with three. The UK also sits third in the categories for earnings ($3,654,089) and cashes (244) behind the USA and Canada.