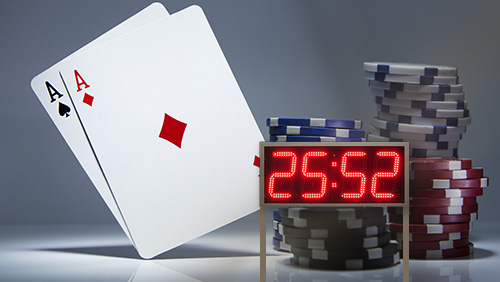 888Poker has announced plans to introduce shot clocks at all 888Live events, beginning with the Main Event and High Roller at the forthcoming 888Live London event in October.

Those six peas in a pod arrived in my email box yesterday; nothing else, just a single sentence – but I felt the emotion as if I was sitting next to the sender at the moment his fingers hit the keyboard.

It was a reaction to this article: Is it Time to Bin Poker’s Triple Crown And Replace it With a Grand Slam, where I drew attention to the growth of the partypoker LIVE MILLION brand and the decline of the PokerStars Championship & Festival brand.

I suggested that the Triple Crown of PokerStars Championship, World Poker Tour (WPT), and World Series of Poker (WSOP) should be broadened to include the MILLION and the Aussie Millions.

“Perhaps, in the future,” I replied to the sender.

In all honesty, the 888Live Main Event didn’t occupy a single neuron when I wrote that article.

When 888Poker launched their mission to Take Back The Game, the cynic in me thought it was another toothless gimmick. I expected to see a barrage of promotional narratives selling a story that never ends up in the libraries of 888Poker players.

But today, my inner cynic remains as silent as the first person who saw the king turn something into gold when he told the person he could turn everything to gold.

The 888Live team has announced that 888Live Festivals will use a shot clock beginning with the 888Live London Festival at Aspers Casino, Stratford, UK (Oct 4-16).

Now let me be as clear as a piece of broccoli bathing in a cabbage field when I explain that every table, at every level, in all Main Events and High Rollers will have a shot clock.

“We believe that implementing Shot Clocks in our 888Live Festivals, is one more step towards us improving our games through cutting waiting times and creating a more even-handed poker experience.” Wrote SVP Head of B2C at 888Holdings, Itai Pazner in a press release.

Anyone carrying out surveillance at live events where shot clocks are in play anyone can tell you that it presents a significant improvement to our game. It removes the biggest buzzkill in poker, and that’s the player who takes too long to make a decision, a problem that some people are circulating as one of the reasons the WSOP numbers have declined this year.

When I play live poker, I need time to make my decisions because I am not very good, so you could say it worsens my situation. But like all change agents in the world, I know that in no time whatsoever it will feel like second nature.

And the best thing about this move?

Online poker operators and live tournament operators are copycats. As soon as someone breaks out a bold and brass piece of innovation, they don their white lab coats and seek to recreate the same thing, only slightly different, to avoid apparent plagiarism.

The poker industry needed someone to stop faffing about and to show a pair of balls, and 888Poker has shown they have King Kong sized balls.

What they have done with this move is say:

Why the hell, not!