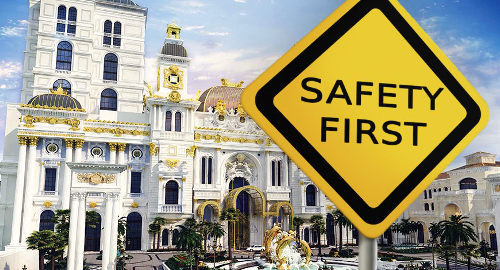 On Wednesday, Commonwealth Casino Commission (CCC) exec director Edward Deleon Guerrero told the Marianas Variety that the CCC had granted IPI’s request to launch gaming operations at the new Imperial Pacific Resort (pictured), but only after the CCC receives certain assurances from IPI regarding the property and the people who work there.

The CCC’s main concerns involve the safety of the unfinished resort, including ensuring that the venue has a fully operational and certified fire alarm system. The work site endured a ‘trash fire’ in March after welding sparks ignited a pile of construction debris.

The CCC also wants assurances regarding strict adherence to federal safety requirements. A worker for an IPI contractor fell to his death in March, and this week saw the federal Occupational Safety and Health Administration (OSHA) impose nearly $194k in penalties against three IPI contractors who were found to have subjected workers to unnecessary workplace hazards.

IPI must also guarantee that its contractors are (a) no longer employing unauthorized foreign laborers, and (b) are actually paying their workers. A number of IPI-contracted firms have been the targets of protests by workers who claim to have gone months without their wages, and just last week the CCC discovered that a subcontractor hired to build gaming tables for the permanent resort hadn’t paid some of its workers in six months.

When all the above is dealt with, the CCC has asked IPI to submit a 2016 audit report, a withholding tax return covering the period between Q2 2016 to Q1 2017, plus documents detailing IPI’s ownership structure.

Deleon Guerrero told the Saipan Tribune that IPI had already submitted some of the requested documents electronically, and the rest of the files are expected to be filed in the coming days. The regulator insisted that the permanent resort’s “gaming part is ready to go. The issue now is safety.”

IPI has missed several scheduled launch dates for its permanent gaming venue, and in April the company was granted an extension on the lease of its temporary gaming venue, Best Sunshine Live, which operates out of a high-end shopping mall in Garapan.