Home / Business / Red Bull may not really give you wings, but it could give you balls 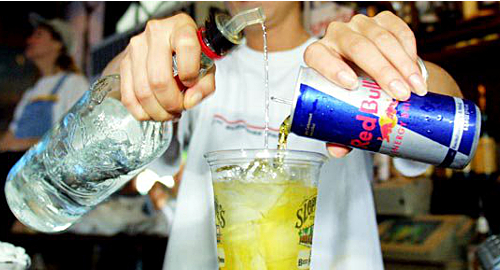 Young men who think they’ve got artificial stimulants in their cocktails take greater risks than those who think otherwise, so you more predatory casino operators out there should start slapping Starbucks logos on your bar glasses ASAP.

A new study published in the Journal of Consumer Psychology sought to determine why the consumption of alcoholic beverages mixed with energy drinks like Red Bull is associated with higher rates of car accidents, sexual assaults and other sketchy behavior. The study, conducted by researchers in Canada, France and the United States, is subtitled “Placebo Effects of Marketing Labels on Perceived Intoxication and Risky Attitudes and Behaviors.”

It worked like this: 154 heterosexual male social drinkers with similar body mass were given identical cocktails consisting of vodka, Red Bull and fruit juice. Some of the group’s drinks featured labels reading ‘Vodka cocktail,’ others read ‘Vodka-Red Bull cocktail’ while the final group’s drinks just said ‘Exotic fruits cocktail.’ But everyone understood there was hooch in their glass.

After a pause to allow the booze to kick in, the participants undertook a series of tasks on a computer, including viewing photos of young women, after which the men were asked whether they’d attempt to chat up each woman and what type of reaction the men expected from each woman.

The men who were told there was Red Bull in their system were more likely to say they’d approach the women, and more confident that their approach would be well received. Interestingly, the effect was even more pronounced among men who believed that the combination of energy drinks and alcohol increased one’s level of intoxication.

The participants then played a simulated gambling game known as the Balloon Analogue Risk Task. The game involves inflating a virtual balloon by pressing a pump, with each pump raising the potential money to be won. Players can cash out at any time, while bursting the balloon by overinflating it leaves them with nothing.

Again, despite the fact that all participants received the same cocktails, those who read the words Red Bull on their drink label gave their balloons 12% more pumps on average than the other groups.

Interestingly, the Red Bull group also reported feeling more intoxicated than the other groups, although the researchers note that they relied on self-reporting, i.e. they didn’t test the groups for dexterity, balance or other standard signs of intoxication.

Researchers suggested this false perception could be shaped by marketing and media messages regarding the effect of combining booze and energy drinks.

There was one positive element from this placebo effect, as those who were told they’d consumed Red Bull also stated that they would wait longer before getting behind the wheel of a car, apparently due to the fact that they believe themselves to be more intoxicated than they actually were.