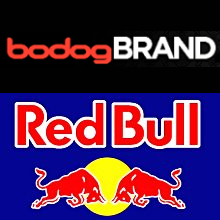 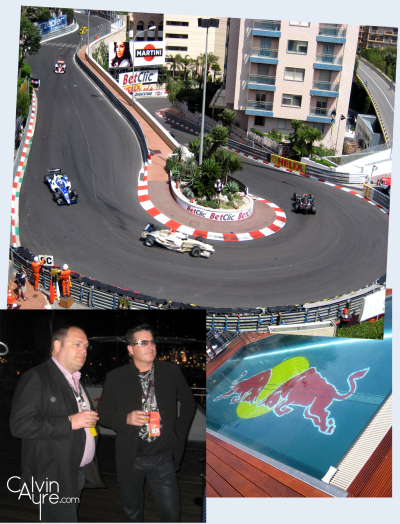 Did I call it or what? Red Bull Racing’s drivers Mark Webber and Sebastian Vettel finished #1 and #2 respectively at last weekend’s Formula 1 Monaco Grand Prix in Monte Carlo, and their ‘feeder’ team Toro Rosso also performed well. And not to gloat, but the hex I put on the Full Tilt/Virgin Racing seems to have worked, as the underpowered pairing finished 20th and 21st out of a field of 24. (That shot of me posing beside their pit station may have been the most high-profile coverage that pairing got all weekend.)

If you’re an F1 racing fan, there really is no choicer spot to check out a race than the French Riviera on a sunny day in May. Choicer still if you’re given access to the Red Bull hospitality suite, as I was (along with my trusty camera crew). Dietrich Mateschitz, the founder of Red Bull, knows what he’s doing when it comes to promoting his brand, and his people did things up in grand style. The Red Bull hospitality zone was THE place to be over the weekend — before, during and after the race — and I thoroughly enjoyed every minute of my time there. Maybe I had such a good time because I felt so at home in that type of environment. The scale of the event reminded me of the OTT bashes that the Bodog Brand is known for throwing, like the poolside parties at our conferences in Las Vegas or any of the anarchic blowouts that have gone down at the Bodog Compound in Costa Rica.

Maybe I had such a good time because Red Bull and the Bodog Brand have much in common when it comes to how we go about promoting our respective brands. We both embody a fun, energetic and adventurous lifestyle that consumers respond to instinctively. The Bodog Brand plays hard. Red Bull gives you wings. And with wings, you can play harder for longer!

Both Bodog’s and Red Bull’s efforts to connect with our target audience via tie-ins with sport have been on a tear of late — Red Bull with its dominant racing squad and Bodog Brand with our beloved Fulham coming just one goal short of victory at the Europa Cup final this month. We’ve also both made the leap into the video game market — Red Bull products make appearances in several games, while I played myself in the Scarface: The World Is Yours release.

There are a lot more ways in which our two branding strategies currently interweave, and there will undoubtedly be even more in the future. On a personal note, I’ll likely add a few Red Bulls to my vodka at the CalvinAyre.com launch party that kicks off the iGaming Super Show in Prague on May 25th. If ever there was an event at which a human being would want wings, this will be it.

Anyway, thanks to Dietrich Mateschitz for the kick-ass time in Monte Carlo. Have to let me return the favor one of these days!

Red Bull may not really give you wings, but it could give you balls
Peter Amsel
16 May 2017

Full Tilt/Virgin partnership like a dog humping your leg
Calvin Ayre
15 May 2010
.