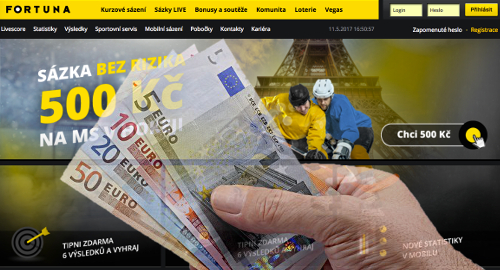 Fortuna released its Q1 report card on Thursday, which showed revenue of €42.7m in the three months ending March 31, a 12.2% improvement over the same period last year. But expansion costs and punter-friendly results did a number on earnings, which fell 36.3% to €3m.

Fortuna’s lottery business generated revenue of €1.7m, down 18.6% year-on-year, and the lottery division reported a net loss of €20k for the quarter.

Fortuna launched online gaming operations in the Czech Republic at the end of February, the first operator to go live under the country’s new regulated framework. Fortuna said online casino spending totaled €16.8m, and while the company declined to offer specifics on online casino revenue, there’s €1m left over after subtracting sports and lottery from the overall total earned in Q1.

Fortuna CEO Per Widerström credited mobile betting for boosting the online numbers despite the unfavorable sports results across all markets – Czech Republic, Slovakia and Poland – in which Fortuna currently operates.

The company’s results should trend sharply upwards going forward, as the Q1 numbers don’t include contributions from Fortuna’s recently acquired Romanian betting operations, including the Hattrick Sports Group and the Fortbet family of betting brands. The deals, which occurred in the latter part of the quarter, will also extend the company’s reach to Croatia and Spain once the acquisitions are finalized.