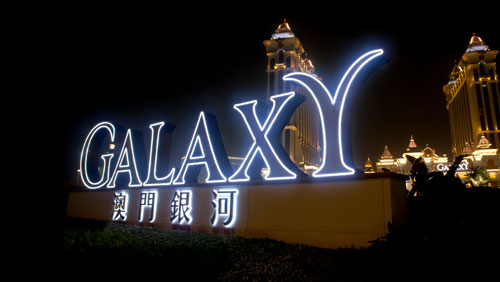 Hong Kong-listed casino operator Galaxy Entertainment Group Ltd. (GEG) posted 5 percent revenue growth in the first three months of the year on the back of a sustainable market recovery in Macau.

GEG announced in a regulatory filing on Thursday that its revenue grew to HKD 14.1 billion (US$1.81 billion) in the three months to March 31, higher than the HKD 13.4 billion ($1.72 billion) revenue it posted in the same period last year. The revenue growth, however, declined by two percent when judged quarter-on-quarter.

The company’s reported adjusted earnings before interest, taxation, depreciation and amortization (EBITDA), on the other hand was up 31 percent to HKD3.2 billion ($411.24 million).

No less than GEG chairman Dr. Lui Che Woo, who haS been very vocal about the stabilization of Macau gambling industry, was pleased with the group’s first quarter performance.

“The continuing growth in the emerging middle-class in the Mainland and their appetite for leisure, tourism and travel gives us continued confidence in the longer term outlook for Macau,” Lui said in an e-mailed statement. “These results were achieved despite additional capacity entering the market in the later part of 2016.”

The casino operator pointed out that Galaxy Macau continues to be the primary contributor to its revenue. The property’s revenue grew 5 percent to HKD10.2 billion ($1.3 billion) – its best revenue quarter in over three years.

Broadway Macau, which does not offer a VIP rolling chip program, recorded revenue of HKD135 million, down 25.4 percent.

Looking ahead, GEG said that it continues to explore opportunities in overseas markets, including Japan, where an enabling bill to legalize casino business was passed by lawmakers in December.

GEG also announced that it will be commencing with the construction of the long-expected Phase 3 and Phase 4 of Galaxy Macau. The new phases will include hotel rooms, convention and exhibition space, entertainment and gaming.

“We continue to carefully manage our capital allocation with a view to the development of Cotai, Hengqin and international opportunities. To further support our international expansion ambitions in Asia including Japan, we are pleased to announce the strategic partnership with Monte-Carlo SBM,” Liu said.