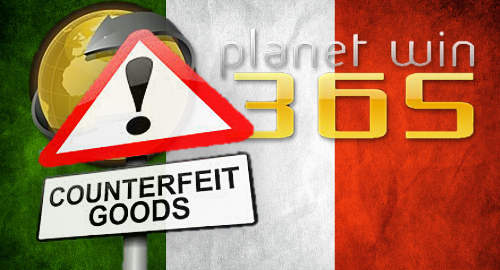 Imitation may be the sincerest form of flattery, but it can also a colossal pain in the butt if the imitators are using your name to break the law.

Over the weekend, attorney Fabio Maggesi, who specializes in internet and trademark law, told Panorama.it that online counterfeiting in Italy had increased by more than 50% over the last five years. Maggesi claimed major Italian brands were routinely pirated by scammers hawking cheap imitations of the original products via websites based outside the country.

These knockoffs, many of them offered by Tunisia-based websites, aren’t limited to clothing products such as handbags or shoes, but also extend to website domains – online gambling domains among them. And Maggesi declared that “by far the most counterfeited brand in the panorama of online betting” is PlanetWin365.

PlanetWin365 is the flagship brand of Austria’s SKS365 Group, which operates land-based betting services in Austria, Belgium, Italy, Montenegro, and Serbia in addition to holding online licenses in Malta and Spain.

SKS365 is among Italy’s top land-based sports betting operators, reporting betting turnover of just under €53m in the month of March, behind only Snaitech and Eurobet on official betting tallies. SKS365 is less dominant online, ranking 18th on March’s online betting turnover chart.

That comparative online weakness could be due to the PlanetWin365 brand being so popular with imitators. In March 2016, the PlanetWin365.com domain was cited by Italian authorities as one of the sites utilized by a Salerno-based illegal gambling operation linked to the Camorra crime organization.

At the time of the arrests, the SKS365 Group vehemently rejected any involvement in the illegal betting ring, claiming that the operators had “exploited the reputation” of the group’s PlanetWin365 brand. Similarly, the company that controls the Betaland brand rejected suggestions that they were behind the gang’s use of Betaland.com and other derivative domains.

Maggesi strongly suggested that intellectual property rights holders don’t cut corners when it comes to registering domains affiliated with their brands. Even if you can reclaim a domain by proving to the relevant authorities that someone is improperly using your name for illicit purposes, the damage to your brand may have already been done.