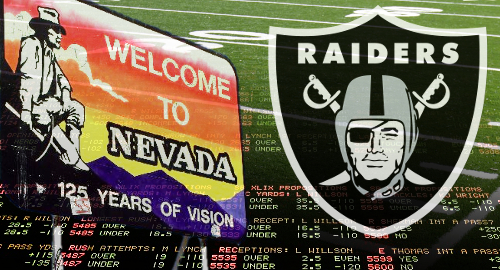 National Football League owners have approved the Oakland Raiders relocating to Las Vegas, although it remains to be seen whether the league will seek to prevent local sportsbooks from accepting wagers on Raiders games.

On Monday, 31 NFL owners voted in favor of the Raiders moving to Vegas, with only the Miami Dolphins voting against the shift. The Raiders are expected to continue to play the next couple seasons in Oakland as they await construction of their $1.9b stadium, which the team will share with the University of Nevada, Las Vegas.

The NFL has traditionally maintained the most vociferously anti-betting stance of any of the major North American pro sports leagues, and while Monday’s vote seems to represent a seismic shift, NFL Commissioner Roger Goodell told Sports Illustrated’s Peter King just last week that the league was “not changing our position as it relates to legalized sports betting. We still don’t think it is a positive thing.”

There is a provision in Nevada gaming law that allows the NFL to request that Vegas sportsbooks not accept action on Raider games. Sports bodies can submit written requests to prohibit betting on “any event, regardless of where it is held, involving a professional team whose home field, court, or base is in Nevada.”

The NFL has been mum regarding whether or not it intends to make such a request. The National Hockey League, which has already announced plans for an expansion franchise in Vegas, has also not yet indicated whether it would seek a betting exemption.

The NFL will also have to lift its longstanding prohibition on league officials from visiting Las Vegas at any point during the regular NFL season. Historically, NFL officials have been allowed to visit Vegas in the off-season, but only after receiving permission from the league, and even then, officials must steer clear of sportsbooks.

Gaming industry reaction to Monday’s vote has been effusive, with the American Gaming Association saying the “historic decision … demonstrates how far gaming has come.” Local bookmakers William Hill US said they were “looking forward to the opening kickoff” and claimed the vote was “further evidence that the myth that legalized betting somehow hurts the game is nothing more than fake news.”

Raiders owner Mark Davis publicly thanked Las Vegas Sands owner Sheldon Adelson on Monday, saying the casino mogul’s “vision and direction made this possible.” Adelson was involved early on in the push to relocate the Raiders but dropped out in January, reportedly after being told the NFL wouldn’t allow a casino owner to own a piece of the team.