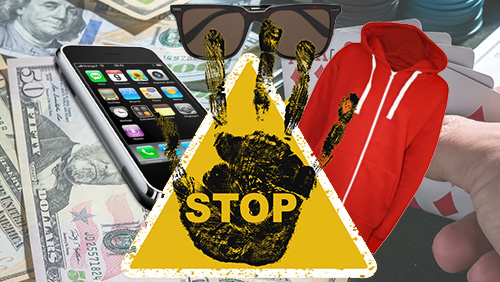 The Commerce Casino in Los Angeles California is planning to host a $350 buy-in $100k Guaranteed event called #TheSocialExperiment that will ban the use of mobile phones, sunglasses and hoods at the table.

A few shakes of a giraffe’s tail ago, I wrote about the relevance of particular types of clothes and accessories in poker, and surveyed around 50 poker players to establish the vibe.

John Eames, a live cash game player from the UK, told me he would ban headphones.

“Because if people weren’t listening to music, they might +talk to each other

It was a brilliantly simple idea and one that I had never considered. But it is an idea that’s been treading brain fluid inside the mind of one of the greatest Tournament Directors in the history of the game, Matt Savage.

On Saturday, 29 April 2017, Event #2 of the California State Poker Championships held at the Commerce Casino in Los Angeles, will turn headphones into contraband – and they don’t stop there.

The $350 buy-in No-Limit Hold’em Triple Stack event has been dubbed “The Social Experiment” and will play out with a whole host of clothing and accessories placed into the Contraband Bin in a bid to improve the social element of the game.

The Commerce Casino Tournament Coordinator, Justin Hammer is calling #TheSocialExperiment poker at its purest form, and I think it’s a brave and bold idea as people have been talking about this for years without lifting a fat finger.

Joining headphones on the banned list include sunglasses, mobile phones and hoodies. Hammer and Savage will dole out three hand penalties to players who break the rules, with further contraventions resulting in a full orbit on the sidelines. The changes have been made to increase fun, but the $100,000 Guarantee provides a serious element that needs managing appropriately.

So how are people swallowing this pill?

WPT Champions Club member, Daniel Negreanu, points out that ‘if you don’t like it, don’t play it,’ before going on to say that it’s a derivative of poker that’s no different to a Stud tournament, for example. Serial World Series of Poker Circuit (WSOPC) winner Valentin Vornicu thinks the idea is pretty cool.


Hearing aids and other devices needed for medical reasons will not be banned; neither will guide dogs. Hats are allowed. You can don a hoodie but not the hood, and scarves are allowed, just don’t use them to cover your face.

Dzmitry Urbanovich wanted to know if he could bring a printed book. Matt Savage confirmed that printed books were allowed, not during the hand, but was amazed that people of his age even read the things.

And although the Commerce Casino are running the event as an experiment, the bigger tours have a keen eye on proceedings, with John Duthie, President of partypoker Live, telling Savage that he really hopes it takes off #goodforthegame

Is #TheSocialExperiment good for the game?