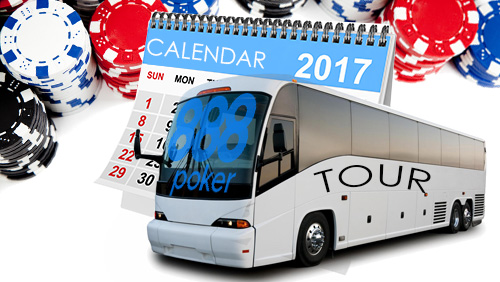 888Poker has announced plans to visit Sao Paulo, Dublin, and many more amazing countries as they roll-out their 2017 tour dates for the 888Live and 888Local tour stops.

The live tournament circuit is as crowded and competitive as ever, and 888Poker want to be a BIG part of it. After successful 888Live events in London and Rozvadov, the team has released their full roster of Live and Local events for 2017, and the prognosis is banging.

First, to the 888Live events and the second largest online poker room in the Milky Way has announced three events for 2017.

The tour moves to Barcelona in May for what will be the biggest live tour in 888Poker history. 888Poker’s expectations for the event are so high they partnered with Main Event Travel (MET) to provide value for those attending. Fraser MacIntrye and his team will make sure everyone gets a flight and somewhere to lay their baseball cap at the end of each session.

Outside of Las Vegas, it’s the Brazilians who create the largest live tournaments, and with Bruno “Foster” Politano, Nicolau Villa-Lobos, Bruno Kawauti, and Denilson on their books there is a real intention on making a BIG presence in this area of the world. 888Live will head to Sao Paolo in August.

The 888Live series will finish in London. 888Poker has a relationship with Aspers Casino in Stratford, in much the same way partypoker has with Dusk till Dawn, and they will put that to good use this year with a whole swathe of events.

The 888Poker motto is to create a tour that has affordable prices for all players. The 888Live events has that perfect combination of high and low rollers, but the 888Local is purely reserved for grassroots poker with buy-ins for everyone

In April, the 888Local Festival will open up for business in Barcelona as a prelude to the big 888Live event in May. From there the tour moves to Aspers in May, stops off in Dublin in June, Madrid in July, Vienna in September, before closing out the year with another two gigs in London in November and December.

You can expect to see the likes of Dominik Nitsche, Kara Scott, Sofia Lovgren, Chris Moorman, Natalie Hof, and Parker Talbot at most of the 888Live events, and a sprinkling of the 888Local events.

And you can expect to see a few household names drafted in for extra sheen. Michael ‘The Grinder’ Mizrachi, Niall Farrell, and Antonio Esfandiari has appeared in the past, and Alec Torelli has started running Facebook Live Q&A sessions on behalf of the team so don’t be surprised if he shows up at an event or two in the future.

Like I said, there has never been a better time to compete in live tournaments, the only problem is know where to start.

You could do much worse than started in Barcelona in April & May, because 888Poker is promising something BIG.