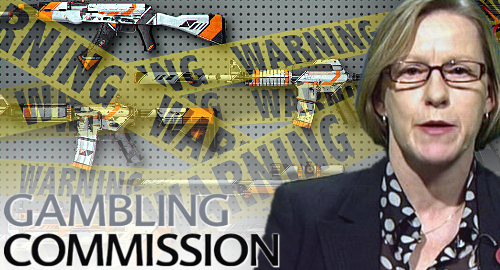 The boss of the UK Gambling Commission (UKGC) has publicly warned parents that they need to guard against their kids blowing their lunch money on eSports skin betting sites.

On Wednesday, UKGC CEO Sarah Harrison (pictured) issued a statement alerting parents to the “dangers of gambling associated with video games.” Harrison said parents could be giving their offspring money “thinking that they are playing a computer game when in fact they are gambling and this is real worry [sic].”

Harrison referenced the growing phenomenon of gambling sites that use in-game virtual items commonly known as skins as betting currency, while stressing that regulators “need to make sure all gambling is fair, safe, crime-free and protects the young and vulnerable.”

Harrison’s concerns were echoed by Department of Media, Culture & Sport undersecretary Tracy Crouch, who warned of “unlicensed websites jumping on the back of popular video games and encouraging children to gamble.”

The UKGC has been taking a more active role on the eSports front since last summer, when it warned that any site offering wagering on the outcome of eSports matches would require a UKGC license. The UKGC also warned that licenses were required for any site offering gambling products in which virtual goods served as a “de facto virtual currency.”

The UKGC backed up these statement by bringing its first illegal gambling charges against a pair of eSports betting site promoters last September. The accused pair pled guilty in February and paid a total of around £265k in fines and court costs. The UKGC’s Wednesday press release showed that its blood was still boiling regarding the prosecution, referring to the pair’s activities as “parasitic.”

eSPORTS POSITION PAPER
The UKGC’s after-school special was accompanied by the release of a position paper on eSports, social gaming and the use of virtual currencies like Bitcoin.

The paper largely glosses over social gaming, saying there is no “persuasive case” for further regulatory intervention at this time, while the UKGC’s stance on virtual currencies continues to be that it’s just another form of money.

That leaves the bulk of the paper focused on eSports gambling. The paper notes that interpreting legislation is ultimately a matter for the courts, leaving the UKGC to focus on areas in which interactive entertainment “has crossed, or is in danger of crossing boundaries into licensable gambling activities.”

The UKGC said it will employ an “appropriately targeted and proportionate use of our regulatory or criminal powers” in dealing with unlicensed gambling facilities, in which “evidence of a risk of harm to children is and will remain a significant aggravating factor.”

The UKGC says a “zero-tolerance approach to small scale or ad-hoc secondary markets for in-game items … may not be practical or proportionate to the risks posed to the licensing objectives.” Where serious concerns exist, the UKGC says “primary responsibility” lies with unauthorized gambling operators but the UKGC intends to liaise with game publishers “who may unintentionally be enabling the criminal activity.”

The UKGC believes skin betting is “a by-product of the manner in which games have been developed and in-game economies incorporated for commercial benefit.” As such, developers and publishers cannot be considered “passive to the exploitation of their player community by predatory third parties.”

While finding no evidence of any “direct commercial benefit” game publishers might derive from skin betting, “it is reasonable to infer that there is an indirect benefit” to publishers if a player loses all his skins on a betting site, leaving him or her with the option of replenishing the inventory by purchasing new skins from the publishers.

As for concerns over eSports betting integrity, the UKGC said it had to date not uncovered evidence that eSports events present a serious integrity risk. That said, the UKGC remains concerned over the possibility of corruption and warned operators not to get complacent in monitoring for unusual betting activity.

eSPORTS STATS
The UKGC says its most recent gambling participation survey found that 8.5% of adults have ever bet on eSports, although only around 3% had done so within the past month. eSports betting was most popular among those aged 25-34 years (44%), followed by the 35-44 group (21%) and 18-24s (20%).

Of those who bet on Esports, 90% did so with in-game items, 88% had bet with real money and 78% bet with both skins and money. Men accounted for 58% of eSports bettors, while women were more likely to bet using virtual goods than with money.