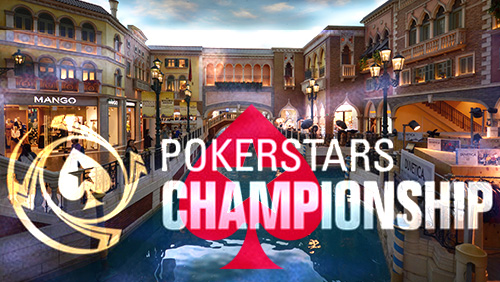 3: Barrels of a PokerStars flavour including new guarantees for PokerStars Championship events in Macau and Monte Carlo; PokerStars Festival Rozvadov update; and there is a million buck Sunday Storm coming your way.


A trio of PokerStars related stories, and we begin with their flagship live product: PokerStars Championship and news of some hefty guarantees in Macau and Monte Carlo.

PokerStars take the Championship model to Macau for the first time March 30 – April 9. The City of Dreams will play host, and the biggest guns in poker are letting rip with some jabs and hooks.

The tournament organisers will also introduce a shot clock into a PokerStars event in Asia for the first time.

The full schedule of events can be found right here.

PokerStars are putting out all the stops in their attempts to make the Monte Carlo event even bigger than ever. The PokerStars Championship Monte Carlo takes place April 25 – May 5, 2017, and we now know the following guarantees:

Also, the team has announced even more ways to qualify for the big boy events with the PokerStars National Championship hosting a 50-seat guaranteed satellite to get into the €1m Guaranteed event. If you bust out, you have a second chance with a new turbo re-entry flight. There will also be a live mega-satellite guaranteeing 30 seats for the PokerStars Championship Main Event.

The PokerStars festival in Rozvadov has gotten off to an auspicious beginning. 740 entrants made sure the €100,000 Guarantee in the €275 buy-in PokerStars Open was smashed.

Fabian Gumz took the first prize of €23,770 after defeating Andrej Desset in heads-up action. It was Gumz largest score to date by a considerable margin. He did well to beat Desset. Last month, the Slovakian beat 332 entrants to win the €440 buy-in Israeli Poker Championships in Vienna earning €20,240.

We have a winner at #PSFRozvadov Congrats to 22-year-old Fabian Gumz of Germany for snapping up the (inedible) title and €23,770 booty pic.twitter.com/Bxak6EjXWJ

It’s not just in the live arena that PokerStars are going to value town, the online realm is also on fire.

The $11 buy-in Sunday Storm celebrates its sixth birthday on Sunday, March 19 and to celebrate PokerStars is slapping a $1m guarantee on the tin with $100,000 reserved for the winner.

That’s $100,000 for a $11 stake – 9,000 times the entry fee, which is insane if you can manage to find the luck needed to wade through a field of 20k+ people. The event also allows you to re-enter once at any time before late registration ends.

Look on the bright side, at least you will have a great excuse to miss work on the following Monday if you do win it.