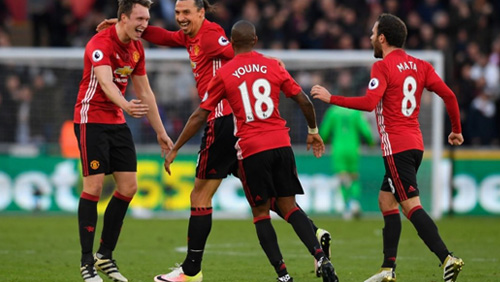 Manchester United win their second cup competition in successive seasons after a smash and grab appearance at Wembley against superior Southampton.

One of the things that set Manchester United apart from their competitors during the Sir Alex Ferguson years was their ability to carve out a win when not playing well. When Ferguson left, so did that perseverance, grit, and skill. But I think it’s creeping back into the DNA of the side.

United’s English Football League (EFL) odyssey began at Northampton and ended against Southampton. It didn’t seem to matter where the compass pointed; United destroyed every team that stepped into their path.

The final was a different proposition. Exu

berant, thanks to their two-week rest, Southampton went at United from the very first whistle and were easily the better side in this one-sided clash. Had Manolo Gabbiadini’s early goal not been incorrectly flagged for offside, the game might have had a different complexion.

But shit happens in football. There are swings. There are roundabouts. And until FIFA remove officials and start using androids as match officials, mistakes are part of the game.

So Saints weren’t rewarded for their early domination, and to rub more cayenne pepper into the wound, United went and opened the scoring against the run of play.

Saints midfield man Oriel Romeu was penalised for a silly hack on the Achilles of Ander Herrera. Zlatan Ibrahimovic set the ball down with some deliberation before lifting it over the wall and into the back of the net. It was the Swede’s 25th goal of the season and one that Fraser Forster should have prevented.

Claude Puel’s side reacted well, returning to their exciting brand of attacking football until United did it again seven minutes before half-time. Jose Mourinho made a bold decision fielding Jesse Lingard ahead of Wayne Rooney and Marcus Rashford, but it turned out to be the right one. The England star picked up the ball in the penalty area and calmly passed it into the back of the net. It was his third Wembley goal in consecutive Wembley appearances for the club.

United had suckered the Saints again.

Fortunately, with the game running into first half injury time, James Ward-Prowse found space on the right wing, sent the ball into the six-yard box, and Gabbiadini was too quick for Eric Bailly to finish off the move from close range. This time there was no flag. The Italian had scored his sixth goal in six matches. The Saints were right back in this thing.

The second half started the same as the first as the Saints kept marching on, and it only took three minutes for Gabbiadini to level the tie after swivelling in the box to sneak the ball past a dumbstruck David De Gea. It was an intelligent finish from an intelligent striker.

From there the game went into a bit of a lull as the Southampton players started to run out of energy, and Michael Carrick came on to hold on to the ball for a United team who were treating it like a bar of soap.

Then just as the game was heading for extra-time, the industrious Herrera found time and space on the right-hand side of the box; floated in an inch perfect cross, and there was Zlatan to head home the winner from close range.

It was Man Utd’s fifth League Cup success, and Mourinho’s fourth, but more importantly, it was United’s second trophy in successive years, and that’s promising for United fans worrying they may never see the glory days return. And there could be more with United also heavily involved in the deep end of the FA Cup and Europa League.

But United is going to have to fix some leaks if they are to challenge for the title next season. They still have problems at the back. Luke Shaw seems surplus to requirements, and Marcos Rojo is an accident waiting to happen.

The other problem they have is in midfield. Paul Pogba may have cost a lot of lolly, but he doesn’t seem to have the defensive aptitude needed for a team to thrive in the Premier League. He is often caught out of position, leaving gaping holes down the centre of the park, and teams like Chelsea and Man City will exploit with ruthless efficiency.

And they also need a man who can score 25+ goals a season when the big Swede calls it a day.

As for Southampton, they were unlucky not to win this title. They didn’t concede a single goal coming into the final and look an exciting young team. But what does that matter? The board will more likely sell most of them in the summer, and they will have to start all over again. It’s only a matter of grains of sand before that policy backfires in their face.