Donaco revenue down double-digits thanks to dead Thai king 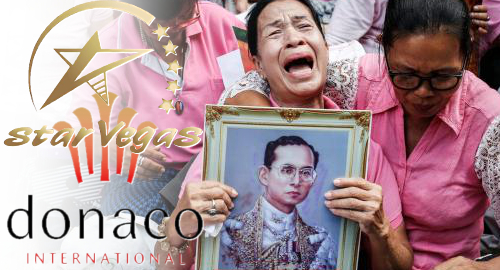 On Thursday, the Australian-listed Donaco reported its revenue in the six months ending December 31 falling 14.3% to A$59m, while earnings fell 14.8% to A$33.3m but net profit after tax rose 5% to A$14.1m thanks to a A$1m reduction in corporate costs during fiscal H1.

Donaco’s flagship Cambodian property Star Vegas had a rough ride in H1, with revenue down 16% to THB 1.2b (US $34.3m), as average daily visitor levels dropped 15% year-on-year. The company pinned part of the blame on last October’s death of the king of Thailand, which kicked off a 100-day mourning period that kept some Thai gamblers from making the trek.

Star Vegas’ VIP turnover fell 17%, in part due to the previous year’s H1 having an additional “VIP event” but also due to some VIPs shifting their business to Star Vegas’ main gaming hall. Compounding matters, VIP win fell 0.26 points to 2.75%.

The Aristo saw VIP turnover fall nearly one-quarter but this was part of the company’s strategy of reducing volume and targeting more mass market gamblers. Fortunately, the property did more with less, thanks to VIP win rising from 2.15% to 3.18%.

Looking ahead, Donaco plans to launch online gaming operations at Star Vegas sometime between April and June, once the company is satisfied with its software platform. The site will feature both live dealer games and “automated gaming,” and plans to operate as a joint venture with select junket operators for an initial trial period.

Donaco said January 2017’s VIP turnover at Star Vegas was up 8.4% over the same month last year and management continues to investigate potential new junket relationships to further drive VIP activity. Aristo’s trading has been “strong” in the year through February 20 as visitation numbers continue to increase.