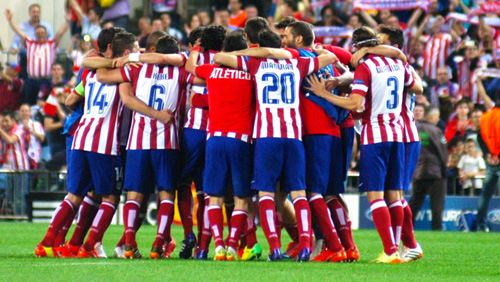 Atletico Madrid remains on course to reach a third Champions League Final in the past four years after beating Bayer Leverkusen by 4-2 at the BayArena.

Last season’s runners-up went into the match as the +145 favourites to win the tie and opened the scoring with a peach of a goal from Saul Niguez who curled a left-foot shot past the Leverkusen keeper to score his fifth goal of the season.

The Frenchman Kevin Gameiro was a royal pain in the ass for the Germans all night, and it was his break, turn and set up that allowed Antoine Griezmann to send the Spaniards into the break with a two-goal lead scoring his 14th Champions League goal in the 25th minute.

Griezmann had a golden opportunity to put the game beyond the reach of Leverkusen just before the break only for Bernd Leno to pull off a tremendous save, and it looked like he would regret it when Karim Bellarabi pulled one back for the Germans three minutes after the break.

But then a stroke of fortune for Atletico after Gameiro was adjudged to have been brought down in the penalty area when the infringement clearly took place outside of the box. With Griezmann missing his last three spot kicks it was left to his compatriot Gameiro to convert to give Atletico a two-goal cushion for the second time.

But plucky Leverkusen kept bombing forward and found a spot of fortune of their own when the Atletico keeper nudged a daisy cutter of a cross into the path of his own defender, and the ball rebounded into the back of the net.

It was back to 3-2 and with another leg to come things were looking a lot spritely for the Germans until Fernando Torres came off the bench to head home at the near post to give Atletico an almost unassailable lead going into the second match in Spain.

Man City had to dig deep and come from behind twice to take a two-goal cushion into their second leg with Monaco after an incredible night at The Etihad.

Raheem Sterling opened the scoring for City in the 26th minute after being presented with a tap-in courtesy of some good work by Leroy Sane. Man Utd flop Radamel Falcao equalised in the 32nd minute with a sweet diving header. And Kylian Mbappe sent the French league leaders in for a slice of orange with the lead after thumping the ball home following a long ball from the back and some dodgy defending by John Stones and Nicolas Otamendi.

Falcao, who was brilliant all night, missed a penalty to put the French side 3-1 ahead, and Sergio Aguero punished him by drilling the ball home through the weak hands of the French keeper at the other end of the park.

Then we had a moment of utter brilliance.

Falcao gave John Stones the slip inside the box and coolly chipped the ball over the head of the City keeper to give the French side the lead for the second time.

For all of City’s brilliance, it was two corner kicks that were Monaco’s undoing. David Silva sent the first over for Aguero to score his second of the night with a volley at the far post. Then Kevin de Bruyne sent one over from the other side of the pitch, Yaya Toure flicked it on, and there was Stones to tap it in at the far stick.

And then with 10-minutes left on the clock, Sergio Aguero found space in the box, drew out the keeper and squared it for Sane to set up a 5-3 win.