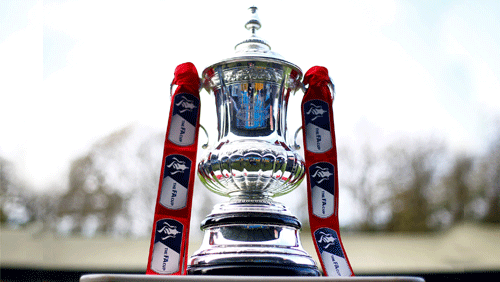 An update of the third round of the FA Cup including National League sides Lincoln and Sutton forcing replays; favourites Man City hammering West Ham, and the holders Man Utd also through with ease.

We will begin our round-up of the FA Cup Third Round ties with the favourites. Man City travelled to The London Stadium to face West Ham with Pep Guardiola under intense scrutiny after his miserable post-match interview last weekend.

Before the game, West Ham boss Slaven Bilic told the press that City was not that ‘confident anymore’ after Guardiola’s side had suffered three defeats in a terrible December.

The Croat should have kept his mouth shut.

City, who have won the FA Cup five times, destroyed West Ham in about as one-sided a match as you are going to see. Yaya Toure opened the scoring from the penalty spot in the 33rd minute, and the game was dead after an own goal and David Silva tap-in made it 3-0 before the break.

Sergio Aguero scored within five minutes of the restart, and with West Ham fans fleeing from the fight, John Stones rose to head home the fifth goal of the game from a corner with time running out.

City, who remain unbeaten in January, is the 5/1 favourite to win the FA Cup. Their last triumph was in 2011 when they beat Stoke City by a goal to nil. West Ham has now lost three games in succession, and Bilic is the 11/4 second favourite to get the sack behind Watford’s Walter Mazzarri.

Stoke and Bournemouth Bow Out

Stoke will not be repeating the feat of 2011 after they crumbled to a 2-0 defeat at home to Championship strugglers Wolves. Wolves keeper Carl Ikeme was in outstanding form to deny Marko Arnautovic, Peter Crouch and Joe Allen; Helder Costa and Matt Doherty put the ball away at the other end.

Stoke have only won twice in their last eight outings, losing half of them, and it’s for this reason that I fear for the safety of Mark Hughes’s job. He doesn’t appear on the Premier League sacking odds. But they are such an inconsistent side. Wolves are 16th in the Championship. Stoke fielded their full strength team with only Joe Allen taking a breather.

Bournemouth, on the other hand, did not field a full strength side. Eddie Howe deserves a lot of plaudits for pushing Bournemouth into ninth place in the Premier League, but has he gotten a little big for his boots?

Howe changed his entire side for the journey to the Den to face Millwall. Is Howe expecting to win the Premier League? Does he believe he can qualify for the Champions League? The FA Cup was the only chance that Bournemouth had to win any silverware this year and the possible future England boss blew it big time.


Holders, Man Utd, came through a comfortable home tie against Reading winning 4-0. Jose Mourinho made a host of changes, but unlike Bournemouth, they have strength in depth.

Wayne Rooney opened the scoring early on when he converted a cross with his knee. It was Rooney’s 249th league goal for United equalling Sir Bobby Charlton’s long-standing record. Anthony Martial and Marcus Rashford (2) finished the rout. It was United’s eighth successive win in all competitions.

League Two side Plymouth deserve a lot of credit after holding Liverpool to a goalless draw at Anfield. Sure, Jurgen Klopp fielded the youngest team in Liverpool’s history – with an average age of 21 – but they are the Premier League top goalscorers. Liverpool had enough chances to win the game and can do without the headache of a replay.

There were no such problems for the Premier League leaders Chelsea as they put four past Peterborough at Stamford Bridge. Pedro scored twice with Michy Batshuayi and John Terry grabbing the other two goals. It was Terry’s first start since October, and he crowned it by getting sent off. Tom Nichols picked up a consolation goal for The Posh.

“We battered them,” said West Brom boss Tony Pulis after his side limped out of the Cup against Derby. Matty Phillips opened the scoring for the Premier League side only for Darren Bent and Tom Ince to score a couple of crackers from outside the box to put Steve McClaren’s side into the hat for the next round.

Hull and Swansea squared off with two new managers, and it was Marco Silva who will be the happier this morning. Abel Hernandez returned to the side after a couple of months on the sideline to open the scoring with 12-minutes remaining. Josh Tymon made sure in injury time. Swansea boss Paul Clement can now focus on escaping from the Premier League dungeon. Hull has a League Cup semi-final against Man Utd on Tuesday night.

The Premier League Champions, Leicester might not be able to win a game in the league, but they are doing rather well in the cup competitions. The Champions League contenders came from a goal behind to beat Everton by two goals to one at Goodison Park. Romelu Lukaku scored for Everton in the 63rd minute, but a brace from Ahmed Musa means it’s Leicester and not Everton who will make an appearance in the Fourth Round.

And Southampton will be kicking themselves after not getting the job done against Championship side, Norwich. Claude Puel’s side headed into injury time with a 2-1 lead thanks to goals from the centre-half partnership of Virgil van Dijk and Maya Yoshida only for both of them to go missing when Steven Naismith headed home the equaliser to set up a replay.

Non-League sides Sutton Utd and Lincoln City are still flying the flag for the underdogs after forcing replays in their respective matches. Sutton United, who famously beat the holders Coventry City in 1989, drew 0-0 with that other FA Cup Giant Killer, Wimbledon. Sutton was unlucky not to win the game after creating the best chances.

National League side Lincoln is also in the mix. They played out a thrilling 2-2 draw against Championship side Ipswich. The Tractor Boys had to come from behind twice after Theo Robinson had put the visitors ahead on both occasions. On-loan Leicester striker, Tom Lawrence, twice saving Ipswich’s blushes, his second coming four minutes from time.

Here are the rest of the Third Round results and odds.